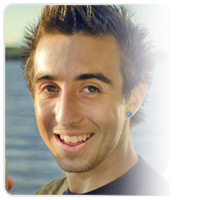 Getting a pro win is one thing. Winning a PDGA National Tour event is something else. Given the depth of talent in disc golf today, winning consecutive NT events is a different accomplishment altogether. It requires raw physical talent, a strong mind, and a courageous heart. Innova Star Team member Paul McBeth has all three and has accomplished back-to-back NT victories.

The Masters Cup is the second NT event of 2012 and took place at DeLaveaga Disc Golf Course in Santa Cruz. This long and treacherous 27-hole design demands the very best of players, both mentally and physically. If there is a weakness in your game, DeLa will expose it. McBeth proved his game was strong this weekend. His average round rating of 1068 was a full 30 points higher than his personal PDGA rating. That is especially impressive at DeLaveaga. Will Schusterick, Nate Doss, and Eric McCabe jumped out to the early lead with opening rounds of 71. McBeth was just off the pace at 73. McBeth was able to pick up one shot on Doss during round two, while Schusterick’s 78 put him five back heading into the final round. Ricky Wysocki was also in the hunt on Sunday. He went 75-75 and was just six shots behind the leaders.

True champions know how to finish though. And on Sunday, McBeth did just that. His blistering round of 68 (rated 1084) propelled him to victory over Doss; a Santa Cruz local, defending World Champion, and the PDGA’s highest rated player. Schusterick closed with 71 to take third. Wysocki tied for 4th, while Avery Jenkins finished with 73 to take home 6th. Ken Climo posted the weekend’s second best score of 70, which vaulted him into 7th. Valarie Jenkins and Patrick Brown grabbed seconds in Women’s and Masters, while Jim Oates claimed third in Grandmasters. Dr. Rick Voakes cruised to victory in Senior Grandmasters.