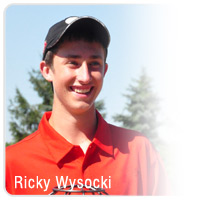 A talented field was on hand for this weekend’s Carolina Clash in Charlotte. Attendance was strong as both amateur and professional golfers sought to sharpen their knowledge of Charlotte courses; many of which will be played in the 2012 PDGA World Championships. Ricky Wysocki, Sarah Stanhope, and Matt Peckham were victorious in their respective divisions, ensuring that Innova was well represented.

Wysocki was being chased by four top players, including two World Champions, but this recent rookie and current US Champion took the field down on his newly local courses, having moved to the Charlotte area late last year. Sarah was six strokes back from the leader, but a ten stroke swing in the final round gave her a four stroke victory. Peckham and Joe Mela tied for first in Masters, but Mela lost in a one-hole playoff to last year’s Clash Master Champion. Valarie Jenkins, Joe Mela, and Brian McRee also delivered outstanding performances and were in contention throughout the weekend.

It was a showdown between the Pauls, Paul McBeth and Paul Ulibarri in Arizona. The pair went stride for stride distancing themselves from the field. In the end it was Uli hanging on to win the Lockdown at the Rock by two. Brian Schweberger claimed his 114th pro win at the Spike Hyzer Ace Run Shootout, while Joe Rovere rallied his way into a playoff he would ultimately win at Hero’s Huk in Colorado.

Many eyes now turn to The Amateur Championships at Bowling Green. This gorgeous Kentucky town was founded in 1798 and features some of the finest disc golf courses and competition in the world. For 35 years Bowling Green has been a staple on the disc golf tour. Huge competitive fields, a challenging and diverse mix of courses, and notoriously windy conditions make winning in Bowling Green a very big deal. Champions generally walk away as favorites to contend for World Championship titles in July and future success at the pro level.
Look for Innova at Phil Moore Park in Bowling Green on Thursday the 29th. Innova representatives Zeb and Todd will be running the Big Gun Distance Competition. See how far you can huck your favorite driver. If you want to check out our hot new Blizzard Champion line of discs, they will also be available to see how much they’ll increase your D.