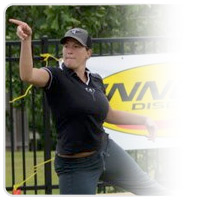 Team Innova Dominant in Finland
Nokia, Finland – The European Open wrapped up Sunday, showcasing a great course, excellent live updates, and a field full of excellent golfers. Valarie Jenkins cruised to a 17 stroke win in the women’s division. Valarie led wire to wire, making her a two-time European Open Champion. The battle among the Open division was fierce all week, with Sunday’s final being the culmination of an amazing week in Finland. Paul Ulibarri held a two stroke lead over Dave Feldberg going into the final round, and with a birdie on the first hole, he had a three-stroke buffer. But Dave just doesn’t know when to quit. A bogey for Paul on the fourth hole tied it up, but Paul would fire back to lead again a couple holes later. Dave reeled it back to par, again and again, before another bogey for Paul gave Dave the lead by two strokes on the 12th hole. Paul was able to tie it back up on the 16th hole, and had an opportunity to take the lead on the 17th, but his putt didn’t connect.

With everything tied, Paul’s drive on the final hole land an inch out of bounds, giving Dave an opportunity for the win, and his 300 foot upshot sealed the deal. Great job Dave and Paul!Also “finnish”ing well were Will Schusterick in 4th, Avery Jenkins in 7th, Karl Johan Nybo in 8th, and Simon Lizotte in 10th. Markus Källström shot up the leaderboard into 12th with a stellar final round.

In his rookie year, Ricky Wysocki has traveled around the country proving he’s not just the new kid, he’s the real deal. Ricky will be playing his first Pro Worlds this year, and if his recent play is any barometer, he’s ready to play against the best in the world. Ricky won at the SFS by three strokes, beating a solid field of pros prepping for Worlds themselves. Josh Anthon took 4th place, Derek Billings 5th, and Barry Schultz 7th. Local boy, Patrick Brown defended his turf in the Masters division, winning by 13 strokes.