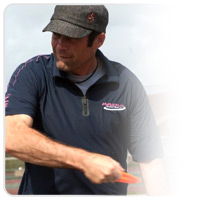 OK, We are starting to lose count… Dave Feldberg has now won… let me check… four… five… SIX A-Tiers in 2012. WOW. His most recent was the Madisonville Open in Kentucky, narrowly edging out Ricky Wysocki for the win.

Most players take the weekend before Worlds off. Dave Feldberg is not like most players. Despite a heavy 2012 touring season, Dave was in action this weekend at the Madisonville Open in Kentucky. Dave lead wire-to-wire, holding off a final round charge by Ricky Wysocki. Ricky was able to trim Dave’s 5-shot lead down to one but had to settle for a second place finish. Paul Ulibarri also played well, finishing fourth.

Matt Orum got the win in Hotlanta, edging teammates Kevin McCoy and Matt Dollar. Matt distanced himself from the field in round two shooting 50 on the Par 61 gold layout at J.P. Moseley Park. His -11 proved to be the weekend’s hottest round and enough to secure his first PDGA win of the year. And that’s about it… everyone is heading to Charlotte for the World Championships . We’ll be posting some lead up interviews and such as we get closer.

Congratulations to all of our team members at the West Coast Disc Golf Championships presented...More

4.29.14Barry Schultz may not have captured the US title last year, but he came charging...More