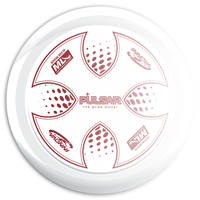 This two-year agreement grants Innova exclusive rights to the production of all discs used in MLU sanctioned events and sold under the MLU name. The deal also assures that any stock Pulsar sold, whether directly through Innova or one of their retail partners, will bear the “Official disc of the MLU” marking.

“We are excited to work with an organization as professional and responsive as Innova,” says Jeff Snader, President of the MLU. “They put a great deal of effort into working out this deal and have helped craft a scenario that will benefit both our organizations for years to come.”

{yoogallery src=[/images/mlu/gallery] width=[90] height=[75] effect=[fade] spotlight=[1]}
The Pulsar, a long-time product of Innova Discs, recently underwent a complete redesign with a new mold and new composition. Fortuitous timing allowed the MLU and some of its players to be part of this process.

The Pulsar recently underwent a complete redesign with a new mold and new composition.

Innova, a huge name in the disc golf world, has long been considering a way to crack the Ultimate market as the disc of choice. Their expertise in disc design and their production capabilities put them in a position to provide a great product and the service to match. They simply needed the right partner to provide the platform for the Pulsar. “We wanted to partner with a highly organized Ultimate association for years. This looked like the best opportunity,” says Dave Dunipace, President of Innova Discs. “We have the ability to produce what the players need, the MLU has a way to publicize our disc, and we, through distribution and advertising, have a way to publicize both the MLU and the Pulsar.”

Would you like to win a disc that was tested and signed by the creator...More