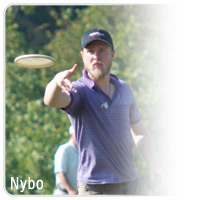 “KJ” Leading after Round 1
It was a wet day in Nokia, Finland today. Wet enough to halt competition for three hours. But Team Innova didn’t let the rain dampen their day. Karl Johan “KJ” Nybo shot eleven under par to take the lead, closely followed by Paul Ulibarri (-10) and Simon Lizotte(-9). In sixth place, Dave Feldberg is at seven under, and Paul McBeth and Will Schusterick sit in eighth at seven under par. Valarie Jenkins, who won the European Open the last time it was held in 2009, leads the womens field by a stroke. The battle will heat up tomorrow, with sunny weather and highs in the mid 80s before dropping into the 70s and possibly 60s for Sunday’s finals. Keep up with the action at Opendiscgolf.com. Live scoring, a live feed hosted by DiscGolfPlanet.tv allows you to catch the action all weekend.

After the first round of competition, it was anyone’s cup. Markus K, David F, and Simon L scored a point each, while Valarie J scored two points. With match play battles yet to be fought, at 11 to 3, it was still anyone’s trophy. Simon Lizotte scored the first and only win for the Europeans. Valarie J, Paul M, and Will S won matches to help take the US team to a commanding lead. David F and Markus K tied, while Paul U also tied in his match. Match play yielded an 18-6 vistory for Team USA. When added to the 11-3 win from singles, Team USA retained the title and beautiful trophy. Congratulations to all who played. This is a great tradition that will hopefully have a long history.