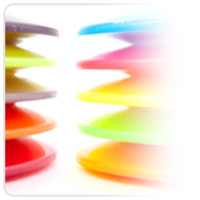 Two new molds have been PDGA approved.
The Mamba is a speed 11 finesse driver for players looking for more turn out of their drives. It excels at giving more distance even when not thrown perfectly. The Dominator is a speed 13 driver that falls between the Katana and the Boss. The Dominator has great glide and displays a predictable finish.

The Mamba was designed to give maximum distance for minimal effort. The Mamba has more high speed turn than any of our long range drivers, so throwing into a headwind is not recommended. For those with less driving speed, it will add distance. For the medium armed crowd, it will shape long lines for turnovers and straight shots, as well as hyzer flips and even big rolls. Initial tests indicate flight numbers at Update [11|6|-5|1].
Coming Soon!
{yoogallery src=[/images/FParticles/mamba] height=[115] width=[115]}

The Dominator is a speed 13 plus distance driver designed to give the best of control and long line shaping for higher power players. Similar to the Katana, with more high speed stability, the Dominator has the glide to maximize distance with a predictable turn. Lower power players will be able to use the Dominator in weights down to the mid 130s in {yootooltip title=[Blizzard Champion] width=[320]}

Blizzard Champion is a proprietary process that allows us to make discs in Champion Plastic lighter than ever! The resulting effect looks like thousands of little air bubbles throughout the disc. Look for your favorite distance drivers in Blizzard Champion soon!
{/yootooltip} plastic. Dominator tests show [13|5|-1|2] as the potential flight numbers.
Coming Soon!
{yoogallery src=[/images/FParticles/dominator] height=[115] width=[115]}
Mamba and Dominator PDGA Approved.-[PDGA]
Share it !