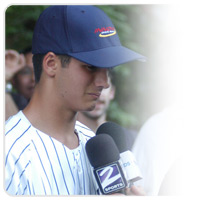 Simon Lizotte and Jussi Meresmaa battled for the top honor in Germany this weekend at the 24th Berlin Open. The eighteen year old Lizotte showed remarkable composure as his Team Captain applied pressure down the stretch. Jussi’s sizzling, final nine round of 25 was 3 strokes better than Simon. In the end however, it was Lizotte holding off the veteran by one.

About 5000 miles away, in Vancouver, another battle was brewing. In this generation gap showdown it was Dave Feldberg, the elder, outlasting Will Schusterick to defend his 2010 victory in Kamloops, BC for the Canadian Disc Golf Championships run by Fan Plastic 4 winner Carrie Neal. For Dave, the Canadian title is just one more feather in his international fedora.

Back in the states it was Carrie Berlogar cruising to victory at the Summertime Open in Sylmar, CA. Paul McBeth finished second in the Open division. Josh Anthon and Derek Billings tied for fourth.

Brian McRee grabbed the top Masters spot at the Tar River Round Up in North Carolina. Brian Schweberger, David Wiggins Jr., and Terry Gallops went 2-3-4 in the Open.

Paul Ulibarri finished 4th at the Minnesota Majestic.
Share it !