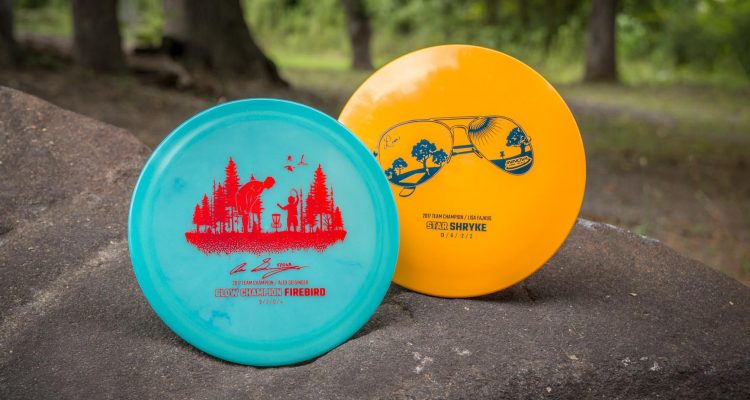 We would like to thank the many customers and fans who support Innova Star Team members each year, through purchases of the Tour Series line of discs at the Innova Factory Store. Your generosity has enabled some of the game’s top athletes to help evolve professional disc golf at the highest level.

Building on the success of the Tour Series program, we are excited to announce a similar program for members of Team Champion. We’ve introduced the first-ever Team Champion Series line of fundraising discs at the Disc Golf United Online Pro Shop.

Lisa Fajkus: Made in the Shades

Lisa Fajkus was racking her brain for something unique for her Team Champion Series disc. “And, it just came to me while I was in my car. I looked up and saw my sunglasses in the reflection in the rear view mirror. And I just thought, ‘Hey that’s something that would look cool on a disc,” said Fajkus of Round Rock, Texas, which is north of Austin.

She’s right. Reflected in a pair of sunglasses is a quintessential Austin, Texas disc golf scene, with a tee pad and basket among rolling hills and mature trees.

Fajkus said she worked with local artist John ‘Worm” Gold in bringing her vision to reality. She said it’s got a calm, cool look and also symbolizes how she’s getting her name out there for the first time. And she liked how it turned out.

“It’s hard to pick the artwork. I feel it’s quite personal. I think you can go so many directions. It’s hard to start. But, I’m pleased how it came out, definitely,” said Fajkus, who placed 3rd at Pro Worlds – her best finish yet.

The stamp appears on the Star Shryke – a disc that’s found a place in her bag. “Right now it’s one of my number one bomber discs in my bag,” said Fajkus, who likes the disc’s fast, and turny characteristics, which also works well for her long flicks. Look for Fajkus to crush some of these Shrykes as she continues her tour, first at a local event in Texas followed by some big tour action like the Ledgestone. One look at Alex Geisinger’s Champion Series disc and you can tell he’s taken with his 4-year-old son Owen. In front of a Minnesota landscape, Owen is pictured reaching up as high as he can with a disc, showing it to his nearby father.

Nowadays, Owen and his dad continue to share the sport. Geisinger has got an Instagram clip where his son, flicks a disc and gets the full ‘S’ of the flight. You can tell Alex is quite proud. “Yes! Walked it off. 92 feet,” boasts Geisinger. “I enjoy watching him throw a good shot as much as I do practicing,” said Geisinger, who lives in Rosemount, MN.

The stamp is featured on the Color Glow Champion Firebird, an overstable disc that’s not a surprise choice for one of the longest throwers in the game and 2015 US Distance Champ. Though Geisinger has struggled with a shoulder/elbow injury this year, he’s on the road to recovery. Expect to see the 2-time Minnesota Majestic Champ at the USDGC this year where he’s had some impressive finishes. 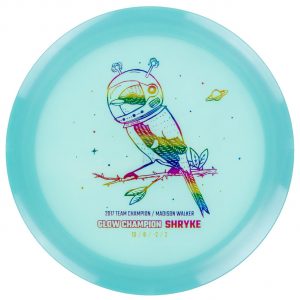 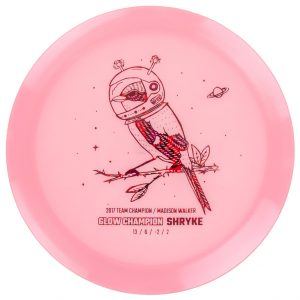 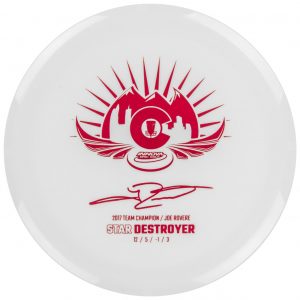 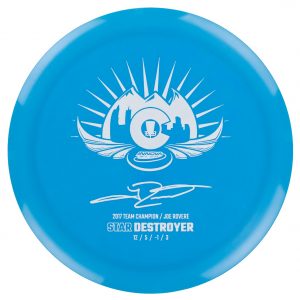 As with Tour Series releases, a substantial portion of the proceeds will directly benefit the athlete. Members of Team Champion will debut a disc model, as well as the accompanying artwork, that is meaningful to them. Athletes whose discs are slated to debut this summer include:

For more information on the timing of individual releases, please follow DGU via the platform of your choice:

02.18.14 With the first PDGA Tour event just days away, anticipation is building to see...More

02.11.14Imagine you are a school-aged disc golfer and then one day out of the blue,...More

Home for the Holidays