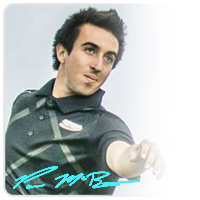 The European Open is held on an extended layout of the Nokia DiscGolfPark in Nokia, Finland. It is a 9000' monster known simply as "The Beast". Many of the world's best disc golfers were on hand this weekend to battle the Beast, including Innova’s own McBeast, Paul McBeth. Paul earned the nickname "McBeast" by his fellow competitors and has since lived up to the reputation one might expect to accompany such a name.

Paul started the final round with a one stroke lead, but after four holes he found himself a stroke behind Schusterick. A seven stroke birdie streak from Paul would put him back on top, only to have Dave Feldberg close in on the gap, coming from 11 strokes back after the second round.

Paul missed an approach to the island green of hole 16, giving Feldberg a share of the lead… ever so briefly. Dave’s very next shot on hole 17 would sail OB, costing him a bogey, and giving Paul the outright lead with a single, challenging hole left to play. After taking a double on 18 the previous round, Paul threw a safe tee shot that landed him behind a lone pine tree, making the approach more challenging. Feldberg followed suit and put his drive 5 feet behind McBeth. Dave’s approach sailed 35′ from the pin, while Paul’s upshot landed about 40′ out. Paul’s tailwind putt was forced down, missing, but gave Dave a read on the wind. Feldberg’s putt hit hard and a bit left, falling out, leaving Paul with little more than a tap in for the exciting victory. It was a dramatic finish that was enjoyed not only by the largest gallery in European Open history, but also live online and on national Finnish television. Other top finishers in the Open Division include Pasi Koivu (4th), KJ Nybo (T-7th), and Philo Brathwaite (T-10th).

Just like the Open division, the Women's Open was a fierce battle. Valarie Jenkins held the lead after a brilliant, second round of 67. This was the only 1000-rated round posted by the ladies during the championship. Val and Paige went back and forth with the lead but after hole 15 of the final round, Valarie had it to herself. Until the challenging par 4 Hole 16, which features a long drive followed by a long shot to an island green, was made into the decisive point of the match. Val took multiple strokes to get on the island, carding an 8, while Paige took a 4. It was now a three stroke deficit, and with 2 holes to go, there wasn’t enough fairway to catch back up. Val raced to catch Paige but ended two strokes out, making a strong second place finish.

Congratulations to Team USA for winning The Presidents Cup. It was a close fought battle, coming down to the final match between Paul McBeth and Simon Lizotte. Paul pulled out the win after several upsets by Europe tied it all up.

Back in the States

Back home in the good ol’ USA, Innova took home some more gold. Barry Schultz and Brian Schweberger won in Open and Masters respectively at the Midtown Chiropractic Raleigh Disc Golf Championship. Christian Dietrich took first in Montana, Matt Dollar shot a smoking 38 (16 under – 1066 rated) on the way to a win in his hometown of Macon, GA. But perhaps the performance of the weekend was Joe Rovere‘s 22-stroke win at the Red Feather Open in Colorado. His LOWEST round was 1067… Wow.
Share it !