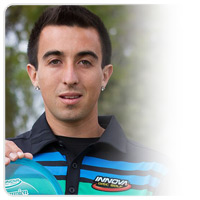 Jack Nicklaus once said, “Nobody ever remembers who finished second at anything.” After starting the 2013 season with back-to-back, second place NT finishes, Paul McBeth commented that he was getting tired of being runner-up. With a little extra motivation Paul headed to the season’s third NT event – the Masters Cup – and won.

Then it was on to the event #4 – the Great Lakes Open – where Paul finished fifth. For most of us, fifth place at a PDGA National Tour event would gain us hero-status among our peers. But for champions like Nicklaus and McBeth, if people don’t remember who finishes second they will most assuredly not remember who finishes fifth. Professional golf is the only sport where, if you win 20 percent of the time, you’re the best.

Paul therefore entered this weekend’s NT – the Kansas City Wide Open – hungrier than most. Not only was he looking to better his performance in Michigan, he was also hoping to improve upon his 2012 KCWO finish, which just happened to be fifth. Paul saved his best golf for the final rounds when it absolutely matters most. And today he has one of those finishes people will remember; first place in Kansas City.

Jack Nicklaus also said, “Professional golf is the only sport where, if you win 20 percent of the time, you’re the best.” If you include Paul’s Major win at the Copenhagen Open earlier this season, he has now won 3 of the 7 biggest events of the season, or, 43%. That earns him hero-status in our book. Congratulations, Paul.