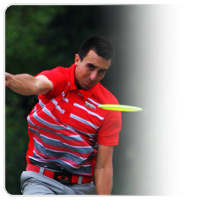 Paul McBeth continues his march on what many believe is one of the greatest competitive runs in disc golf history. At this weekend’s Vibram Open, Paul won his third PDGA National Tour event of the season; a win that also sealed a first place finish in the National Tour points series.

He did so in convincing fashion, winning by 13 shots over an extremely talented field. After shooting a 50 in Round 3, which carried a PDGA rating of 1088, Paul said simply, “I can do better.” On Sunday he did just that. Paul closed out the NT season with a bang, carding an almost unimaginable round of 45 that consisted of 14 birdies, 4 pars, and ZERO bogies. No other player posted a score in the 40s the entire weekend. Also having a stellar weekend was Pennsylvania’s Devin Frederick. Devin came out firing on Thursday with the hot round, leading the tournament after the first day. After day two, Devin held strong in a 4-way tie for the lead. Devin finished in 11th place. Steve Brinster surged to crack the top 10, finishing in 9th place. McBeth wrapped up the season with three of the eight National Tour titles. Paul has won EVERY Major this year which includes the Copenhagen Open, European Open and the World Championships.

The run Paul is on right now is incredible. If he goes on to win all four Majors this season it would be an accomplishment unparalleled in disc golf.
– Innova Team Captain Ken Climo photo by Chad Corduroy LeFevre
Valarie Jenkins also enjoyed a successful weekend in Massachusetts. She battled back from a lukewarm opening round 68 to claim the Women’s Open division title. Val followed up that 68 with rounds of 61, 59 (the lowest women’s round of the tournament) and a closing round of 62. “Every shot mattered down to the wire and it was nice to come out with the win,” said Val.

Cory Sharp was in action at the Monster Energy Challenge in Salt Lake City. Cory enjoyed a bit of a home field advantage and was able to outlast California’s Jere Eshelman for the men’s Open title. Teammate Steve Loyd also played well, picking up an overtime win over another California great, Mike Loya, to win men’s Masters.

Matt Dollar won the Sugar Grove Shootout in North Carolina. He managed to survive some serious roll away misfortune and two holes of sudden death in route to his 8th win of the year. Duane Steiner had a somewhat easier go at it this weekend. “CD” lead wire-to-wire to win Masters at the Dynamic Discs Open in Kansas.