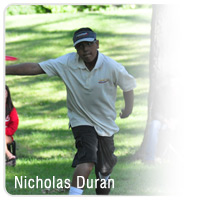 Christian Dietrich again proves he’s the top player in Montana, winning at the Mystery Ranch Open in Bozeman. Gregg Hosfeld sored the win in masters, and is probably motoring the rest of the way to Santa Cruz for the World Championships now.

In Glide, Oregon, Nathan Sexton cruised to a win while Paul Ulibarri finished third in the open division. Adam Hunt gets another win at the PITT Open in Kansas, while Russ Burns takes third.

Brian Schweberger brought home the “Maillot Jaune”… that’s French for yellow jersey.. AKA, the win, at the Tour de Richmond. At the Santa Maria Open, Patrick Brown showed why he’s the best Masters player in California, winning after going to bed Saturday with an eight stroke buffer on second place. In the open division, Will Schusterick was leading after day one, with Joe Rovere just a stroke back. Will finished in second place, Ricky Wysocki climbed into third, and Rovere finished fifth.

We would like to congratulate all the new World Champions at the Am Worlds in Rochester, and wish all the players good luck at next week’s Professional World Championships in Santa Cruz/Watsonville/Monterey, CA. Go get ’em!