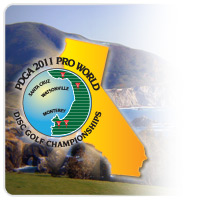 The last time the World Championships were held in California, Innova Champion Discs hadn’t molded our first disc. It was 1982, and Harold Duvall captured the first PDGA World Championship. Now, almost 30 years later, the Pro Worlds return, this time to Monterey Bay, with courses from Santa Cruz to Monterey.

With Worlds on the horizon, lots of players have reason to be excited about winning a world title. Avery Jenkins and Valarie Jenkins have chosen to make Santa Cruz their home away from the tour, so they should be quite familiar with the courses to be played. Their home course is DeLaveaga, one of the most challenging courses with hilly, craggy and rooted terrain that will demand mastery of your putting and approach game. Down the road in Watsonville is Pinto Lake. This course will feature tight technical holes, open field holes and rope, rope, rope. At the other end of the bay, are Ryan Ranch, featuring windy, canyon terrain, and Cal State Monterey, Which features mature oaks, sandy terrain and constant winds. With mornings around 55, and highs in the mid 80s, this year will be the coolest worlds in recent memory.

Over 400 players are arriving from around the World to compete. For the first time, players will be playing a single 27 hole round each day. This will make every birdie count, as players only get a single shot at each of the 108 holes.

In the Open Division, past champions Ken Climo, Barry Schultz and Dave Feldberg will be battling the courses to add another title to their resumes. This year, more than any other recently, it is the young players that have ratcheted up to World Championship Caliber.

Paul McBeth, Paul Ulibarri, and Devan Owens have won National Tour events this year, is this the year for one of them? Will Schusterick is sure to want to add a Pro Worlds title to his impressive resume including his USDGC title from last Fall. Other notable players to watch are Josh Anthon, Markus Källström and Matt Orum, who have all finished second at Worlds. Could there be a new player ready to rocket to the top of the leaderboard? Both Ricky Wysocki and David Wiggins are having banner rookie years and will be competing at their first Pro Worlds.

Last year’s Womens Champion, Sarah Stanhope looks to add another title to her list. But she’ll have to compete against Valarie Jenkins on her home turf, as well as three-time World Champion, Des Reading who visits the area each year on tour.

In the Masters field, 100 players will be competing, but Patrick Brown, from nearby San Francisco, is probably the most prepared for this year’s event. He’s not only having a hot year, but he is familiar with these courses, and his recent play in the Masters division has been pretty dominant. Can he be stopped? Jay Reading may just have something to say about that, he’s the highest rated player in the Masters division.

In Grandmasters , it will likely be a battle between Dave Greenwell, Joel Kelly, Jim Oates, and Steve Wisecup. They are the top rated players and this year, it’s anyone’s game.

One thing’s for sure. It’ll be an exciting battle each day next week. Stay tuned Tuesday through Saturday, to see who can hoist the trophy high on Saturday.

Who do you think has the right stuff to win?