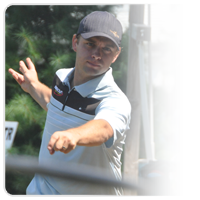 Any time you get an ace captured on video, it’s special. Getting it featured on the PDGA website while on your way to winning an A-Tier event, well that’s just sweet. Steve Brinster did both this weekend at the Seneca Creek Soiree… and we’ve got the video to prove it, just click through to see this beautiful shot.

Seneca Creek State Park is a spectacular 6300-acre jewel of a park a few miles north of Washington, DC that features one of the area’s premier disc golf courses. The Soiree has been attracting disc golf’s most talented competitors for over twenty years. Steve Brinster’s win made the trip from New Jersy a worthwhile one. Brian Schweberger took second place while Joe Mela and Craig Gangloff finished in fourth place and fifth place. Check out Steve’s ace captured by Disc Golf Monthly below. DGM will be doing an episode on the Soiree this month.

Paul McBeth traveled to Florida seeking to end his recent string of second place finishes. Getting a win in Clearwater however, has been nearly impossible for more than a decade. Clearwater is home to 12-time World Champion Ken Climo, who typically has no trouble defending his turf. Paul also had to contend with Ricky Wysocki who was gunning for another big win in 2012. Ken, Paul, and Ricky all worked themselves into contention and at one point or another held the lead during the final round. When the dust finally settled, McBeth had edged both Climo and Wysocki by a single throw to become the Fun n Sun Champion.

Will Schusterick grabbed his third win in a row, this time at the Standing Rocks Open in Wisconsin. He beat a huge field of 65 Open players also included Dave Feldberg (3rd), Chris Sprague (9th) and Paul Ulibarri (10th). Nathan Sexton was victorious as well, picking up his 50th pro win at the Great Northwest Open. At the Vintage Cup in Napa, CA it was Patrick Brown winning Masters and John Child with a solid second place finish in the Open Division. Other winners include Christian Dietrich at the Kooky Noosa Challenge and Ray Johnson at the Showdown at Lave Creek.