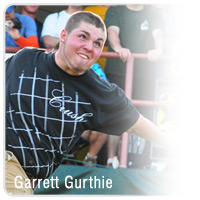 Double G Hosts an Am Worlds Distance Clinic
It’s a warm summer day at Genesee Valley Park in Rochester, N.Y., and team Innova member Garrett Gurthie lets one rip across a playing field that looks as if it might fly forever.
An older man among a gaggle of disc golfers attentively watching raises his hand to ask the longest arm in disc golf a question.
“Did that disc ever land?” he asks half joking.

Gurthie, who was in the middle of leading a distance clinic during the Am Worlds Field Event day, smiles and then continues the afternoon’s lessons, which included proper grip, run-up, weight shift, and more.

Gurthie breaks down successful driving into three main elements. First comes timing. It’s critical to achieving maximum distance and it’s not something you just stumble upon. Watching instructional videos and having seasoned pros watch you will make a big difference, says Gurthie. Establishing your own brand of footwork is next. Gurthie developed his run-up after incorporating five motions that smoothly maneuver him across the tee pad. Then, in order to ignite the blast, Gurthie transfers his body weight to coincide with the run-up. Using a big hip shift, the rest of his body is set into motion and eventually sends his arm into what he calls a ‘reverse punch’ release. If all of this is done in-sync then look out.

After so many distance titles, including four in a row at the USDGC, the 1020-rated Gurthie is the preeminent authority on power drives. Last fall at the Bid D in the Desert, the Gainesville, Fla. resident came as close as anyone to breaking the nine-year-old world distance record held by Christian Sandström. Using a 165-gram R-Pro Boss, Gurthie landed just 17 feet short of the 820-foot record.

Gurthie, who throws 600-feet without blinking an eye, says breaking the record is just a matter of time.

“I think it was very informative especially for beginners because I know a lot of people want to throw far and he’s the perfect person for it,” said Mitchell, who prefers a 175-gram Star Boss.

Mitchell, no slouch when it comes to the long drive (his personal best is 619-feet), said he’ll try to use a few Gurthie tips to make his long arm a bit more manageable on the course. One of those tips includes starting his driving run-up at the far right end of the tee pad.

Junior disc golfer Jacob Abshire-Womack, of Houston, isn’t quite reaching those lengths just yet, but since the 12-year-old practiced with Gurthie at a tournament in Texas his drives have dramatically improved. His dad said after just a 30-minute session with Gurthie, his son was already driving 50-feet further than his typical 150-foot drives. And now some four months later, the boy, who is competing in the Under 13 Boys division, is parking 285-foot holes.

“We gave him a few pointers in Texas,” said Gurthie with a smile.

Gurthie, long known for his big drive, won his first A-tier as a pro this year at the Veterans Park Open in Arlington, Texas. Not surprisingly, a textbook Gurthie blast on the last hole helped win the tournament.

One of the biggest things Am players can do is limit the amount of drivers they carry in their bags. Amateurs tend to bog down their bags with discs they’re really not familiar with.
Innova Team Member – Garrett Gurthie

Gurthie enjoys these clinics and helping the sport’s player base get better. All it is, he says, is teaching the players what he knows. Granted, not everything he shares will work for them, but a few things will and that’s all that matters. The PDGA has noticed Gurthie’s people skills and have used him more this year during skill sessions on tour.

Garrett tells players “What players need is to pack only four or five drivers they’ve already learned from every condition. That way there are no surprises.”

Gurthie is also lending a hand in Rochester this week for the distance competition and ferrying the juniors to their various courses. He’ll even be doing a little scouting for future team Innova prospects.

All this just a few weeks before the Pro Worlds in northern California where Gurthie will likely win another distance title and maybe even a World Championship.