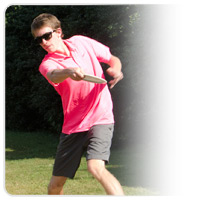 For the first time since 2000, the USDGC has a back to back champion. Will Schusterick of Nashville, TN, can boast Championship crowns from 2010 and now 2012 after outlasting Ricky Wysocki by two strokes on Saturday.
This time Schusterick had several members of his family in attendance including his mother, sisters and grandparents. "There’s no better feeling in the world than to have family there as I succeeded," said Schusterick.

It didn’t take long for Schusterick to get going on Saturday. After a birdie on the first hole, he made a spectacular fairway ace for eagle on Hole 2 that gave the crowd a hint of the show that was in store. Wysocki steadily climbed his way back, though. Past the midway point, on the par 5 Hole 13 (888’), Wysocki threw a laser of a third shot across the parking lot bordering the green and nailed the eagle to tie it up. Wysocki said prior to that throw he had the momentum in his favor and had just seen Schusterick land close for a likely birdie. “He parked it, so I had to do something,” said Wysocki and he certainly did. Winthrop Gold feels like my home course. I’ve said that since the second year I came here.
– Will Schusterick

Going into Hole 17, Schusterick had a two stroke lead over Wysocki, however the Stockholm Open Champion left himself a lengthy putt after landing safely on the treacherous island green. When Schusterick missed his birdie putt, Wysocki had the chance to narrow the lead to one going into the last hole after his side arm landed within makeable range. However, Wysocki missed, hitting the chains wide left to the shock of the crowd. Wysocki took extended moments by himself on the 17 green, and then again on the tee of 18 to think things over and regroup. "I definitely wasn’t done yet. I still wanted to birdie (Hole) 18 to put the pressure on," said Wysocki after the round, adding that he’d battled all day and he planned on continuing.

Looking similar to 2010, Schusterick then threw four safe shots on hole 18 to defend his title and become the 2012 USDGC Champion for the second time in a row. Wysocki fought valiantly, finished with a par on 18 and secured a solid second place finish. Others finishing well included third place Josh Anthon (-44), fourth place Paul Ulibarri (-41), and tied for fifth at (-40) were Nikko Locastro and Steve Brinster.
Share it !