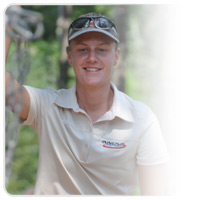 Fresh off wins at last weekend’s Pittsburgh Flying Disc Open, Ricky Wysocki and Sarah Cunningham rolled into Columbus looking to continue their solid play at the Brent Hambrick Memorial Open. The BHMO is the fifth of only six PDGA National Tour events in 2012, so disc golf’s finest were in attendance seeking glory of their own.

Ricky is on an impressive run at the moment. He finished second to Paul McBeth at the PDGA World Championships, then last week edged out McBeth for the title in Pittsburgh. This weekend top pros battled wind, rain and heat on the scenic Hoover Dam West Disc Golf Course in Columbus, OH.

McBeth, Paul Ulibarri, Barsby and Schick were battling on the lead card during round three when Ricky dropped the hammer from the second card. Ricky’s course record round of 65 (unofficial PDGA rated 1104) sent him from two back to a comfortable seven stroke lead going into the final nine. Ricky held on to win by six strokes. Dave Feldberg made the final nine, finishing in 4th. Paul Ulibarri and Paul McBeth finished tied for 5th.

Sarah Cunningham is also lighting it up on her summertime tour. Last week she and Valarie Jenkins were part of an exciting finish at the Pittsburgh Flying Disc Open. Val made up 6 strokes in the final round to tie Cunningham and Sarah Hokom, forcing a three way sudden death playoff. Six holes in, Cunningham was able to outlast Val for the dramatic and hard fought win. This week, Sarah went into the Final 9 tied with Paige Pierce and two strokes up on Val. With solid play, she held on to win her first National Tour title of the year by two strokes over Val.