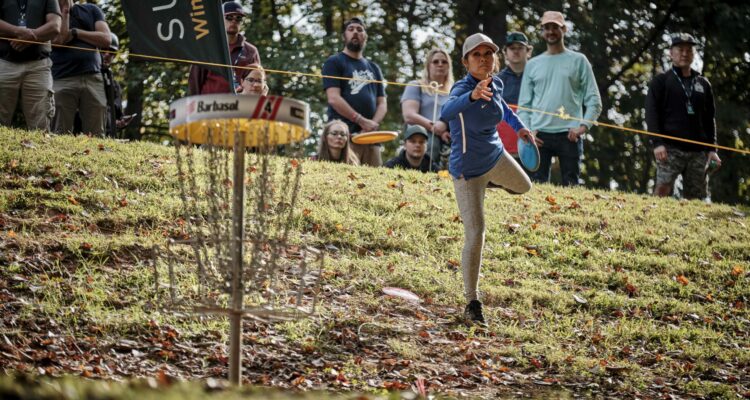 The 2022 Disc Golf Pro Tour Championships have brought this year’s DGPT season to an end. Team Innova had 12 players, six in MPO and six in FPO, who qualified to play with their outstanding performances this 2022 season.

The event had the biggest tournament payout in the history of disc golf, with a total purse of $302,000! First place in both divisions received a record-setting $35,000. The Disc Golf Pro Tour has managed to top themselves each year at this event, consistently breaking payout records, and setting a precedent for equal pay between divisions. 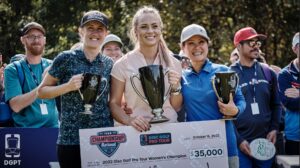 This year, for the first time, the Disc Golf Pro Tour Championships took place at Nevin Park in Charlotte, North Carolina. Nevin is a classic North Carolina style course that favors players who disc down and stay in the fairway. Gap hitting and strong scramble skills are a must. Bogies and bad tree kicks are almost inevitable, so players who can avoid getting frustrated will have an advantage. With so many courses on tour benefiting athletes with big arms, Nevins is an excellent end-of-season test of accuracy and mental fortitude.

Jeremy Koling earned himself a spot to play in Round One by winning the six person play-in event for the MPO. In Round One, Koling met Innova Teammates Gregg Barsby, Garrett Gurthie, Anthony Barela, and Bradley Williams, in a matchup of 16 players competing for four spots in the Quarterfinals. 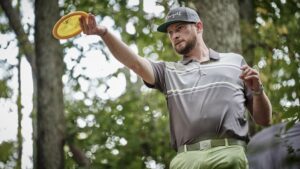 Bradley Williams shot the hot round of the week at -7 to earn himself a place in the Quarterfinals. In Round One, Bradley Williams’ putter did not hit the ground, making 100% of his putts from both Circle One and Circle Two!

Calvin Heimburg and Joel Freeman earned themselves byes through to the semifinals with their unbelievable 2022 seasons. Both players shot solid rounds. Joel made a late run, taking birdie on three of the last four holes to get to -2. Calvin made 100% of his putts from Circle One and three from Circle Two in the semifinals. Joel and Calvin will each take home $5,500 for making it to the semis, an amount that would be a respectable first place prize at most tournaments.

Ohn Scoggins Putts Her Way onto the Podium

In the FPO, Hailey King and Jessica Weese qualified in a close and exciting play-in round. In the Quarterfinals, they met Emily Beach, Kat Mertsch, Maria Oliva, and Eveliina Salonen in a matchup of 12 players competing for four spots in the semifinals. 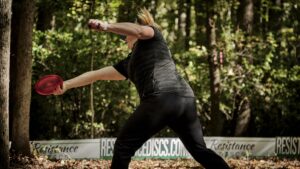 Eveliina earned a spot in the semifinals, taking birdie on the last two holes to barely edge out Sarah Hokem. Eveliina, a player best-known for her unmatched driving capabilities, led last weekend’s tournament in C2 putting for the FPO!

Ohn Scoggins went into the Pro Tour Championship as the number four seed. That position gave her a bye into the semifinals. In the semis, Ohn made 100% of her Circle One putts and multiple putts from deep Circle Two to move into the Pro Tour Finals. 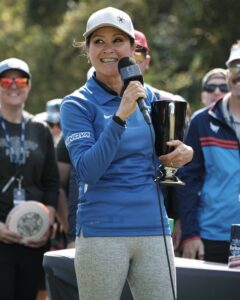 In the Finals, Ohn yet again made every putt inside the circle, shooting even par and taking 2nd place! She won $20,000 dollars, the biggest payout of her career. This season, Ohn Scoggins won the Masters Worlds, the Tim Selinske Masters, The FPO Match-Play Championship, and podiumed at 6 other Elite Series and Major events. This 2nd place result in the Pro Tour Finals caps off a sensational season for Ohn.

Team Innova had an absolutely fantastic 2022, with Seven DGPT Silver Series and Elite Series victories and over 30 podium finishes. We won 15 age-protected Major titles between the 2022 PDGA Masters and Juniors Worlds and the 2022 Tim Selinske Masters. And Hailey King won her first Major title (of many to come) at the 2022 United States Women’s Disc Golf Championship.

It is bitter-sweet to see such a memorable season come to an end. The players will appreciate the chance to rest and recover, spend time at home, and tweak anything that may have been off in their game during the year. But we know for lovers of disc golf coverage like us, we are already counting the days until February and the Las Vegas Challenge! Innova will be putting out tutorials, season highlights, and much more this offseason to get everyone ready for what is shaping up to be our most exciting year yet, 2023. Lookout for a Full Season Recap coming soon at InnovaDiscs.com as well as some of the Team’s top moments from 2022 posted to our socials!