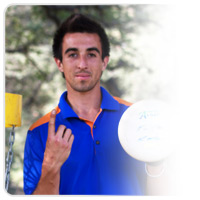 With the first PDGA Tour event just days away, anticipation is building to see which players are primed for the 2014 season. Paul McBeth and Jessica Weese made early statements this past weekend at the 36th Annual Wintertime Open in Pasadena. Both players trained with purpose during the off season and were clearly prepared for competition. McBeth was joined atop the leaderboard by teammates Kyle Eckmann and Philo Brathwaite who helped complete a top 3 sweep in Men’s Open. Jessica grabbed the early lead in Women’s Open, and then padded it with a remarkable second round that carried a PDGA rating of 1005. Jessica further distanced herself in the final round, cruising to a comfortable win. McKayla Thomas was also sharp and finished third. Two members of the Innova Junior Team were victorious at the Gentlemen’s Club Challenge in Las Vegas. Anthony Barela took down Men’s Advanced, while Jacob Courtis was best among Boys <13. Barela hails from Mesa, AZ and is the current PDGA World Champion for Junior Boys <13. Courtis is from Buena Park, CA and was the runner up at last year’s Worlds for boys <10.

Jay and Des Reading picked up another family sweep in Texas. Des won Women’s Open at the Cedar Hill Chill, while Jay earned the top spot in Masters. The Saturday-only Chill was followed by the Towne Lake Pro/Am on Sunday, where Des iced the weekend cake with another Women’s Open win.

Kyle Crabtree got his first win of the year at Washington’s Battle Benny 2, as did Josh Childs at the Winter Hunger Games in South Carolina. For more information on upcoming disc golf tournaments please visit www.pdga.com.