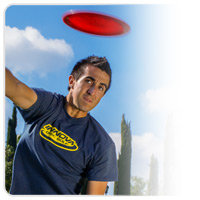 Imagine you are a school-aged disc golfer and then one day out of the blue, back-to-back World Champion Paul McBeth calls and asks you to join Team Innova. Sounds hard to believe, but that is exactly what happened recently when McBeth himself, founded Innova’s new junior team.

Starting this spring a select group of young disc golfers, which currently stands at seven, will represent Innova and be mentored by McBeth. These youth, who can be up to 17 years old, will receive sponsorship much like other Innova sponsored athletes. Along with disc golf equipment, junior members are also eligible for financial assistance to the Amateur World Championships in July. McBeth, 23, of Clearwater, Fla., said he appreciated Innova giving him the nod at the early age of 16 and he now wants to provide others with the same kind of opportunity that motivated him.

“I think it’s a good way for Innova to start putting that spark into younger players,” said McBeth, a touring pro since 2008.

13-year-old Madison Rogers of Fayetteville, Ark., did not hesitate to accept Paul’s offer. “I was really excited. I had no idea that they were going to have juniors. I had never heard of it from any of the other disc golf manufacturers,” said Rogers, who also said that McBeth is one of her main influences in disc golf.

The icing on the cake for Madison and her fellow teammates is direct access to Innova’s marquee player for tips on disc golf and everything else. Over the years, Innova has given discs and gear to younger players, however there has never been an official team until McBeth proposed the idea during his own sponsorship discussions this past December.

“Paul is a superstar on and off the course”, said Innova Team Manager, Jonathan Poole. “Everything he does is to push himself, the competition, and the game as a whole, to an entirely different level”, said Poole. McBeth, who has been busy training for the 2014 season, said it was fun to call each of the candidates with the team invitation. When Rogers got her call she couldn’t believe it at first. “It was crazy just being able to talk to him over the phone and be in this situation to be on the junior team,” said Rogers. After talking with McBeth, Rogers was then surprised with a cake from her father that read “Congrats Madison! Team Innova”.