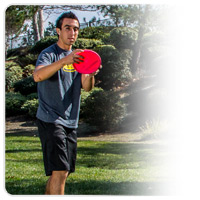 When you are warming up right before a round what are you looking to feel?

Paul: For putting I want to reach a point where I am not thinking any more. I want to be able to just let it go and hit the pole. There is just that comfortable spot where I’m not thinking at all about what I am doing mechanically.

You Tweeted just before the Memorial that you “love the first day nerves”. How important is it to make the first putt, or the first few putts, of a tournament round?

Paul: I don’t think it’s that big of a deal. Missing a putt at the beginning of a round, or the beginning of a tournament doesn’t mean you are going to lose. When I miss it usually motivates me. Once that passion kicks in I just automatically know that it’s time to get it going.

Who is the best clutch putter you’ve ever seen?

Paul: Steve Rico. I grew up watching and playing with Steve. He has hit some of the biggest putts I’ve ever seen. Can you name the greatest shot you’ve ever made?

Paul: I’d say my final round tee shot on Hole 17 at Fountain Hills when I got my first NT win. I had thrown all of my Destroyers in the water except for one. I had to throw my least stable one when it mattered most. It felt so good when I released it. That one shot helped me secure the win.

If you could change one rule in disc golf, what would it be?

You came within one win of sweeping the Majors last year. How do you build on that?

Paul: I am more motivated to win this year, especially the bigger tournaments. They mean more to me now. As for the sweep, I don’t want to get ahead of myself. It is one tournament at a time. You can’t win them all if you don’t win the next one.

Now that you are in the record-breaking business, do you think about what is perhaps the hardest record to beat, Ken Climo’s 12 World Championship titles? Can you win 13?

Paul: It is definitely something I am going for. If I can stay healthy, keep getting better, and my level of passion stays where it is, I see no reason why I can’t get to that number.

Thanks for your time, Paul. Best of luck this season!
[youtube:http://www.youtube.com/watch?v=JLMRCZ_tZck 420 260]

2014 Memorial: Final Round with Paul McBeth