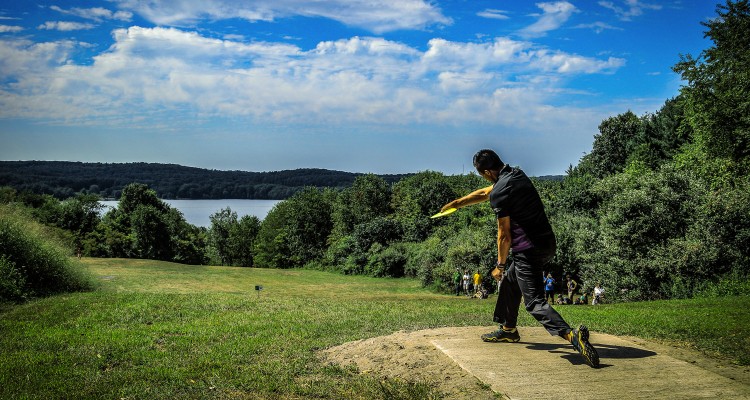 Disc golfers are enjoying a fabulous week here in the Pittsburgh area at the 2015 Pro Worlds. Excellent battles are going down all over the place across multiple divisions. Since Worlds is such a large event we would like to share some information that should prove helpful as we approach the final rounds.

Many spectators head straight for the lead group in the Open Division. That was a great call on Thursday as fans were treated to a spectacular, course record-beating round by Paul McBeth at Deer Lakes. Paul began the day eight shots from the lead, yet ended the day only back one. The best players in the world are putting on a show every day so you cannot go wrong following those groups. There was also quite a show yesterday afternoon in the Masters Division. It was an all-Innova card that featured Ken Climo, Patrick Brown, Mike Moser, and Jay “Yeti” Reading. Patrick began the morning round today with a five shot lead over Climo so the action there is sure to be exciting down the stretch.

In Women’s Open, Valarie Jenkins continues the lead the way for Team Innova. Val currently sits in a tie for 3rd place at +4 for the championship. Val will no doubt be seeking to claw her way to the top in pursuit of her 4th World Championship title. If you have never seen the best women in the world compete, get prepared to be amazed. When navigating the courses during tournament play be sure to mute your cell phones or turn them to vibrate. Most people are following PDGA Live Scoring feeds which we highly recommend. Hand-held leaderboards also accompany the event’s top groups. It is also important to do your best to remain behind the competitors to minimize any distractions. Should you find yourself in the sightline of a player making his/her shot, just do your best to remain still. One other important tip is to provide competitors with plenty of space. A distance of 40-50 feet is plenty. This distance also provides room for members of the media who are covering the tournament action.

Be sure to come visit us at Slippery Rock tomorrow. Innova will have a booth right next to the giant PDGA tent that serves as tournament central. We will have a variety of items to sell and plenty of free swag as we celebrate the conclusion of this fantastic event. We look forward to seeing you there!

What: 2015 Pro Worlds Finals
When: Saturday, August 8th / Rounds begin at 8:00am
Where: Slippery Rock University, 1 Morrow Way, Slippery Rock, PA 16057
Details: World Championship events feature an abundance of divisions for both men and women. The finals will begin early with the older age groups such as Legends, Grandmasters, and Masters. The final rounds for Open and Open Women are projected to start by early afternoon.
Directions: Exit 105 on I-79. Left on Rt 108 (Harlansburg-New Castle Road). 3.5 miles, then Right on South Main Street in Slippery Rock. Go .5 miles, then Left on Keister Rd. Travel .5 miles, then turn Left at East Lake and into parking lot near Critchfield Baseball Stadium

If you are unable to attend the event be sure to tune into Disc Golf Planet for live video coverage throughout the week. DGP.tv also plans to feature live, disc golf industry workshops to discuss the game’s most important and intriguing issues.