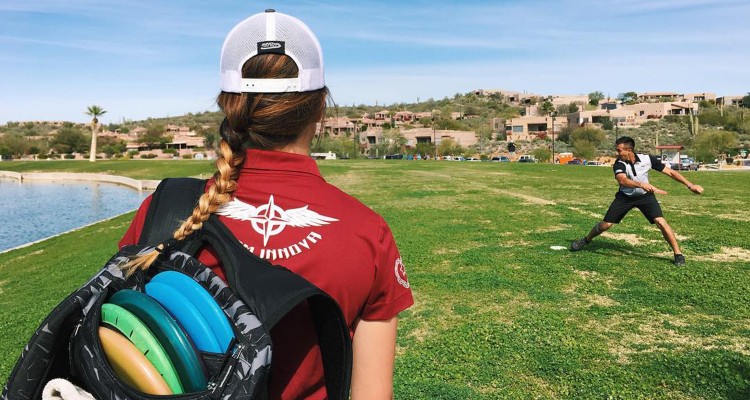 Paul McBeth and Nate Sexton kicked off their 2016 “McSexy Tour” in style by capturing the top two spots at this year’s Memorial Championship. McBeth’s opening round of 43 put him into a tie for the lead right away. Sexton trailed the leaders by only two, so Paul and Nate were in perfect position to push each other throughout the week. McBeth once again proved to be too much to handle. He was able to get past Nate by a single throw to capture his 4th Memorial Championship crown. The two were joined atop the leaderboard by last week’s GCC Champion, Philo Brathwaite, and the 2015 Advanced World Champion, Anthony Barela. “AB” was on the showcase card for round one; which included Paul McBeth, Nate Doss, and last year’s Memorial winner Jeremy Koling. The 16-year old Barela held his own carding an impressive 48 which helped keep him in contention during the week. Brathwaite and Barela would eventually finish in a tie for 7th place. Ken Climo opened his season strong with a dominant performance in Masters. Climo took a commanding lead in round one and cruised to a seven shot win. Teammates George Smith and Justin McLuen got off to slower starts, however rallied down the stretch to pick up the 4th and 5th spots respectively.

Joe Mela and Tom Carrillo battled hard all week in the Grandmasters division. Mela was able to build a 4-shot lead heading into the final round, however Carrillo chipped away at Joe’s lead to finish in 2nd place just one shot back. Jim Oates and Glenn Patterson also had a strong showing in Grandmasters, both finishing in the top five.

The Innova Women’s Team had a strong showing in Memorial as well. Eight of the 20-person Pro Women’s field were Innova sponsored athletes! Jennifer Allen lead the ladies with a solid, 3rd place finish. Valarie Jenkins was right behind her in 4th. Jessica Weese had to rally back after a difficult opening round. Weese clawed her way back to what wound up being a very impressive 6th place finish. Rounding out the top 10 were Zoe Andyke and Madison Walker.

Two of Innova’s younger stars were in action on the Memorial’s Amateur side this weekend. Kona “Star” Panis and Kaylee Campbell earned the 4th and 11th place spots among a strong, 28-person Advanced Women’s field. Kona also pulled double duty as McBeth’s caddy throughout the week. In Melbourne, Florida another young phenom was making his name known as well. Calvin Heimburg battled his way to his first career PDGA A-tier win at the Melbourne Open. Calvin was in contention from the onset and then a hot, third round 49, propelled him into the lead. Calvin finished strong on Sunday and took home the Melbourne crown by two.

Sandy Gast and Pam Reineke matched one other shot for shot in Pro Women. The two were deadlocked after 72 holes but it was Sandy who ultimately prevailed. Women’s Amateur World Champion, Jess Hill, finished in 4th place.

All of the game’s elite now hustle out to sunny, Southern California for the kickoff of the inaugural Disc Golf World Tour . The tour’s first stop is in La Mirada and while only carrying A-tier sanctioning with the Professional Disc Golf Association, this event is likely to feel like a Major. There will be plenty of talent on hand. And with only five DGWT events in 2016, tour points are going to be a precious commodity. Players will be definitely be looking to get out of the gates strong this weekend.

For coverage and information on the Disc Golf World Tour visit www.discgolfworldtour.com .