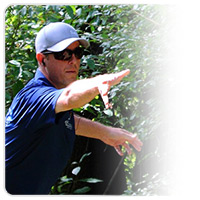 Congratulations to Barry Schultz on his induction into the Disc Golf Hall of Fame. Barry was welcomed into this elite group last night by Hall of Fame director Al Guerrero, and long-time friend and mentor, Don Hoffman. He was also greeted by many of his teammates who are HOF members, including Dr. Rick Voakes, Alan Beaver, Juliana Korver, and Ken Climo. photo by Chad Corduroy LeFevre
During his acceptance speech, Barry fought back the tears as he thanked his family, past coaches from a variety of sports, and the many friends he has made traveling around the world.

I have always wanted to be a part of this group. I am so thankful that I can now say I am.
– Barry Schultz

Barry spoke with deep admiration for Wisconsin’s Don Hoffman for whom he was able to present into the HOF back in 2011. "As much as I wanted to be in the Hall of Fame I have maintained that I would not go in before Don. I am glad they got that order right", Barry said. He went on to speak equally as fond of one of Innova’s original owners, the late Tim Selinske. "Tim helped me so much, especially during the early part of my career. I would not be here if were not for him."