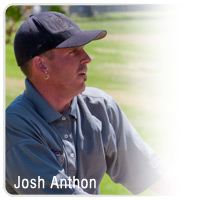 He may not be a hurricane, but Josh Anthon powered through Pennsylvania for his first NT win this year. The lead card in the finals was all Innova, with Anthon, Ricky Wysocki (2nd), Steve Brinster (4th) and Paul Ulibarri (6th). Also rounding out the top ten were Paul McBeth (7th), Dave Feldberg (9th), and Avery Jenkins (10th). Innova took seven of the top ten spots in Open! Innova also took first place in the Masters Division, woth Mike Moser battling back in a close fought race with local favorite, Tom Kim and Phil Arthur.

Hurricane Irene’s outer band winds made play challenging for the players. Valarie Jenkins finished fourth in the Open Womens division. Most of the top pros will be braving floodwaters and power outages as they head East to Leicester, MA for the final stop on this year’s National Tour.

West Coast Winners
Up in the hills north of San Francisco Bay, Stafford Lake hosted pros and ams. Innova dominated with Derek Billings and John Child duking it out for the win, clear of the rest of the field by 11 strokes. Derek took the win over John by 4 strokes. Patrick Brown won in the Masters division by ten strokes.
Nate Sexton gets another win, and Chandler Fry takes the runner up spot at the Mountain High Disc Golf Tournament on the slopes of Crystal Mountain in Washington State.
Steve Loyd gets the title of Idaho State Champion for his win in a big 32 player field.
Young Nick Duran grabbed a nice second place Advanced finish in the New Mexico State Championships.

It’s easy to play tournaments… but when you are the Tournament Director AND a player, finding the focus to play well can be a challenge. Matt Dollar, who organized and ran the Hotlanta: Return of the Fire Chicken tournament, somehow found a way to do both. Congrats on a great win!

Back on the East Coast, Terry Gallops shot lights out on Sunday to win at Barber Park in Greensboro, NC. His final round of 41 was strong enough to finish 5 strokes ahead of the competition.

Here’s hoping you and those close to you are safe after the weekend weather or got out and played a round or two!

Get Well, Joe Rotan!
Our good friend and teammate, Joe Rotan played great at Pro Worlds in California, he didn’t take home a trophy, but he…. well, he hasn’t made it home yet. He contracted a nasty case of poison oak which spread to several internal systems, and he was rushed to the hospital. He’s out under home care, and we wish him the best of luck with his recovery.