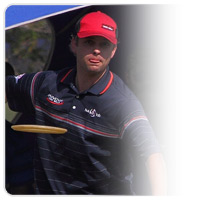 Brinster grabbed the early lead but then found himself tied with another Major winner, 2010 World Champion Eric McCabe, when Saturday’s play concluded. Home cooking must have made the difference on Saturday night as Brinster finished strong on Sunday with back-to-back rounds of 52. Brinster’s final round of 52 from the blue to blue bested the course record by 3 strokes, a record Steve had held. That solid play earned him a 17-throw margin of victory. Teammate Joe Mela grabbed the win in Masters, winning by 7. Other top performers were Jason Dore (5th place Open) and Glenn Patterson (3rd place Masters). photo by Chad Corduroy LeFevre
While not on the calendar, a gaggle of big arms headed to Primm, NV to compete in the Desert Wind Throw designed to achieve world records. David Wiggins Jr. was in attendance including several other big arms, including former record holder Christian Sandstrom. The longest throw during the competition was from David Wiggins, measuring 255 meters, tying his current world record. Wow!

The ladies were in action at the Magnolia Open in Appling, GA. Sarah Cunningham lead wire-to-wire and eventually won by 7. She was joined at the top by teammates Sandy Gast (3rd place) and Debbie Scott (4th place). For ladies who are thinking about playing in their first tournament, the Magnolia is definitely one to consider.

Team Innova made it a sweep in Burlington, NC at the Sneeky Pete Classic. Barry Schultz won men’s Open, Holly Finley won women’s Open, and Brian McRee won men’s Masters. McRee needed extra holes to squeak out the victory over Brian Schweberger who was tied with McRee at -36 at the end of regulation.

Matt Kern also notched a victory at the 5th Annual Great Pumpkin Bowl in Louisville, KY, as did Matt Dollar at Lost in the Woods in Roswell, GA.
Share it !