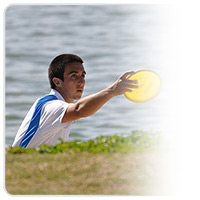 Paul McBeth has turned up the heat in 2012. He came out slinging at the Memorial with an 1100 rated first round and held on for the victory. He has been traveling around the country playing big tournaments and won his second NT at the Masters Cup in Santa Cruz. We thought you’d like to know a bit more about Paul.

Paul McBeth: Huntington Beach is awesome and it sucks to have to move, but the price of living there is expensive and I only get to enjoy it for the winter months. The move to Florida was a last minute choice. I was looking into other places such as Denver, CO and Des Moines, IA but in the end Florida just seemed like a better fit for my girlfriend and me.

You have now won back-to-back Memorial Championships, and most recently won consecutive NT events. Not too many players have either of those accomplishments on their resume. What are some of the key ingredients to your success?

PM: I have finally begun to play “my” game. I try not to follow other players shots because they work, I throw the shots that best fit me. Everyone is built different and throws different so what works for them might not work for me. I feel that if I make a mistake I want it to be on me and what I practiced instead of following someone else hoping to get the same result. I know you had some competitive experience in baseball growing up. Do you think that helped prepare you either physically or mentally for disc golf at this level?

PM: Yes. I believe any kind of sports background helps. It teaches you to learn your body and what you’re capable of doing, which shows you your strengths and weakness, which then allows you to become stronger in those aspects. Baseball also gave me a great coach and great players to compete against which has always pushed me to be the best I can be both on and off the field.

Do you have plans to pursue baseball (or any other sports) in the future?

PM: I really would love to keep playing baseball, but I feel like Disc Golf is on the edge and I want to be a part of the movement. I want to be remembered for helping the sport make that push to the mainstream.
Pages: 1 2
Share it !