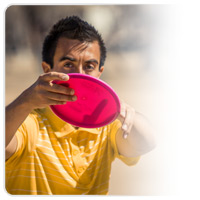 Paul McBeth proved once again that he is one of the best putters in disc golf, especially in clutch moments when virtually everything is at stake. At this weekend’s Copenhagen Open in Denmark, Paul needed to play brilliantly just to keep pace atop a leaderboard loaded with many of the world’s best players. His solid play landed him on the lead card for the final round just three strokes behind the leader.

In the final round Paul was able to erase a three shot deficit and tie Devan Owens for the championship lead with just one hole to play. Both players had birdie opportunities on the 72nd hole. Devan’s missed his 37-footer a little low, leaving Paul to do what he does best. Paul stepped calmly to his lie and sank a 35-footer for the win and his second PDGA Major title. [youtube:http://www.youtube.com/watch?v=6pMCYeYILpo 420 260]
TheSpinTV.com – Meet Paul McBeth
In this SpinTV video, our production crew went to meet Paul McBeth in Huntington Beach, CA. We followed Paul to tournaments but also took apart of his laid back lifestyle outside the tournaments.

Congratulations to our top finishers:

David Wiggins Jr. was victorious in Virginia, winning the No Quarter at New Quarter 5.

Joe Rovere continued his hot streak with a sixth consecutive win at the Crossroads Open in Colorado. Kathy Hardyman also won in Colorado, which was her third win of the season.

Next Weekend: US Masters