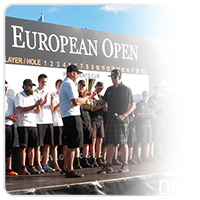 EO2013 features the best disc golf ever seen in Europe. Top players from all over the world gather to Nokia to compete for the EO Champion title in Open and Women’s Open divisions.
The event began today with the President's Cup where the best of USA and Europe battle it out in match play. This year was closer than ever before with the entire outcome resting on a single hole.

“With only 2 matches remaining to decide the competition, team USA had 24 ½ points to 21 ½ points for team Europe. Murmurs could be heard in the crowd of spectators when word came that Henrik Johansen had just defeated Will Schusterick 2 and 1 on the next to the last hole to put team Europe into a tie with Team USA at 24 ½ points with only 1 match left to be decided. The atmosphere was electric as current world champion Paul McBeth of team USA and current European Champion Simon Lizotte of team Europe, perhaps the two best disc golfers on each side of the Atlantic, came to the challenging and dangerous par 4 last hole all square.”


{yoogallery src=[/images/FParticles/eo2013] height=[95] width=[95]}
Tune into OpenDiscGolf.com on the 18th (Thursday) throughout Sunday the 21st. The week culminates to Finals which start at 10 AM (EET) on Sunday. The final moments of the EO will be broadcasted live on a Finnish national TV channel, YLE TV2 and streamed over the net free of charge. The event schedule is available here.

The Aussie Open is the first Major of 2015 and McBeast mode has been activated....More