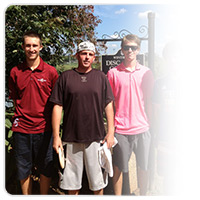 Josh Anthon and Ricky Wysocki have been on a tear at USDGC, carding identical first (57) and second (55) rounds to lead the field heading into the third round today at -24. Nikko Locastro was not far behind at -22 and coming in fourth was Will Schusterick at -20.

The lead card teed off this afternoon without skipping a beat. All four players birdied the first two holes. Josh, Ricky, and Will battled throughout the day; each one sharing the lead at one point during the round. Josh’s putting was lights out and he held the lead by two strokes until the final hole. On 18, Will disregarded any danger Winthrop Lake posed and canned a monster downhill putt for birdie. That was a perfect finish to his stellar round of 53 (-15). With that, he surged past the tie with Ricky and picked up two strokes on Josh to tie for the lead going into the final round at -35. Not far behind, Ricky finished up at -33. Matching Schusterick’s round of -15 from the third card was Steve Brinster and Innova Europe’s own Jussi Meresmaa who tied for fourth at -31. Paul Ulibarri also shot well today with a 55 which leaves him tied for sixth with Nikko at -28. Paul McBeth makes up the last of the second card only one stroke back at -27. DiscGolfPlanet.tv continuing coverage begins tomorrow at approximately 1:15 pm EDT. Make sure to tune in tomorrow at 1:40pm EDT to watch the all Innova lead card tee off for the final round. Scores are tight and it’s anyone’s game.