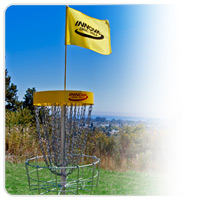 With two days until the competition begins, players are trying to learn the courses around Monterey Bay. The scenery and nightlife offer a release from the 27 hole rounds. After experiencing several of the courses, players favor DeLaveaga, which is a seasoned tournament course. Ryan Ranch offers a more traditional open layout, similar to courses in the midwest or Texas, but hole lengths will challenge players to throw long AND accurate.

CSUMB is a fusion of two courses. The more manicured side is straight-forward golf, with some challenging Out-of-Bounds. The Oaks side of CSUMB plays through challenging scrub brush and unique ice plants. Missing fairways can involve tangling with the dreaded Poison oak, as several players have already learned, the hard way.

Our first World Champions, in the mixed doubles event, are Paul Ulibarri and his girlfriend, Catrina Allen. They took a big lead in the first round of doubles and carried it into a win in the well seeded mixed doubles field. Gregg Hosfeld and Erin Hart also picked up an early lead and held on for the Grandmanster mixed doubles win.

Players eagerly checked in at DeLaveaga Disc Golf Course to receive a Champion Roc+ with a special tournament stamp as well as a pair of Keen’s newest disc golf shoes, the … well named “DeLaveaga”.
Share it !

The final rounds of the 2014 PDGA World Championships were perhaps the most exciting ever...More