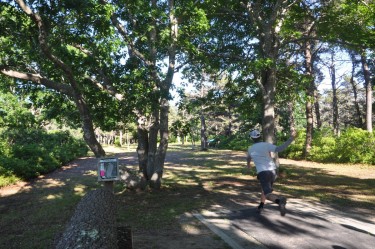 It has been an exciting month on the fall tournament scene. This past weekend it was an Innova team sweep at the Warwick Disc Golf Championships. Steve Brinster rebounded after a disappointing USDGC finish and defended his home course in Warwick, NY. Rounding out the top Open positions were Mike Moser and Andrew Fish who tied for second place, and Devin Frederick who finished in third. Hannah Leatherman and Joe Mela were also victorious, picking up the Women’s Open and Men’s Masters titles respectively.

Patrick Brown was back home in California after his dramatic USDGC run. Patrick earned the top spot in Men’s Masters at the NorCal Series Championships in Stockton, as well as the season’s overall series points title. In the Open it was Max Nichols finishing second behind a red hot Josh Anthon.

Jay and Des Reading were home in Austin at the 37th Annual Waterloo Disc Golf Classic, a huge PDGA C-tier drawing nearly 200 competitors. Jay was able to edge Brad Williams to claim the Men’s Open title, while Des captured the Women’s Open crown for the second year in a row. Joel Kelly picked up a nice win as well, taking down Men’s Grandmasters by two throws.

The Readings have been on a tear since Pro Worlds this summer. The pair went on a state championship run hitting some top notch mountain courses in Montana, Colorado and New Mexico. Up at the 8,500 ft Bohart Ranch in Bozeman, MT, Team Innova swept the MT State Championship A-Tier with Christian Dietrich taking Open, Des Reading in Pro Women and Jay Reading in Masters.

They then peeled out towards the 9,800 ft Sunlight Ski Mountain course in Glenwood Springs, CO for their state championship where Des Reading won Women’s Open and Tom Carrillo was victorious in Men’s Masters. From there it was down to the New Mexico State Championship which welcomed 117 competitors to the beautiful ski town of Ruidoso, NM at 6,900 feet. Huge props to Des who went on to claim her third State Championship in as many weeks. And also to Jay who drained a 45 footer to win Men’s Open on the first hole of sudden death.

Congratulations to all of our team members who have traversed the country in recent weeks. Here is a snapshot of some of the other top performances: