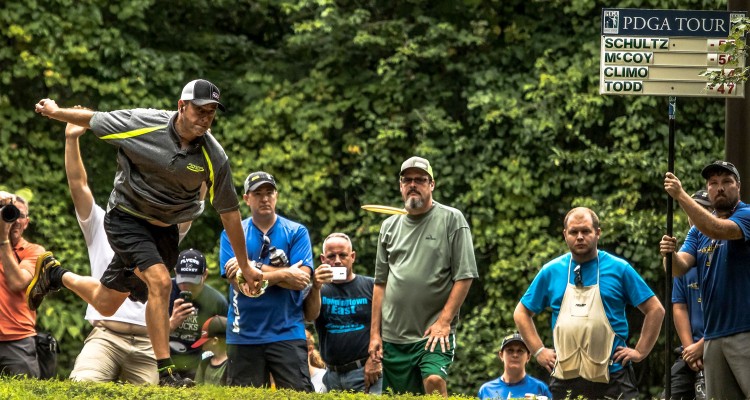 Share it !
An extremely talented masters field assembled in Charlotte this weekend for the Tim Selinske 2015 US Masters Championship. The event often referred to simply as “the Selinske” has become one of the most coveted Major titles in disc golf. Innova would like to thank the Charlotte Disc Golf Club, the tournament staff, and each of the 301 competitors who joined us to celebrate Tim’s life through this wonderful competition.

One of those gritty competitors was 4-time US Masters Champion, Barry Schultz. The 2010 US Masters was Barry’s first-ever tournament in the Masters division. He won. Barry was able to slip past Patrick Brown that year in a sudden death playoff. Schultz successfully defended the title in 2011, and again in 2012. Barry added his fourth title in 2014 so he was once again looking at an opportunity to defend. After skipping Pro Worlds earlier this month, Barry came into this tournament fresh and exceedingly focused. Schultz was especially close to Tim Selinske and was chosen to speak on his behalf at the opening ceremony. Barry provided a warm welcome to competitors and shared some memories of Tim, who passed away in 2009 after a lengthy battle with Langerhans’ Cell Histiocytosis. Schultz also came out strong on the course. He fired an opening round of 55, landing him just two back of teammate Kevin McCoy. On day two Barry took over the top spot with a 1052-rated round of 51. Barry had plenty of fellow team members to keep him company. McCoy, Patrick Brown, Brian Schweberger, George Smith, and Ken Climo all spent time at or near the top. But in round four Barry posted his best round of the tournament, a 1073-rated 41, which put him in complete control heading into the final day.

Barry played relatively safe on Sunday, cruising to 6-throw win and his 5th US Masters crown. Kevin McCoy locked down the second spot. Patrick Brown hung in to round out the top five. Stan McDaniel was able to edge out Laymon Gray for the win in Grandmasters. Stan now adds a US Masters title to his career resume that includes three Masters World Championship titles in 1994, 1996, and 1997. Stan is also a member of the Disc Golf Hall of Fame. Another Charlotte legend and Hall of Famer is Alan Beaver. Alan battled hard all weekend and his efforts paid off as well. “Al Birdie” rallied down the stretch and captured his second US Masters title in the Senior Grandmasters division. Debbie Scott lead the way in Masters Women, taking home the second spot behind the venerable Elaine King. Des Reading finished in third.

Even though the touring season is beginning to wind down there are several extremely important events on the calendar. The final stop on the PDGA National Tour is the Disc Golf Hall of Fame Classic. This event will be held on September 11-13 at the International Disc Golf Center in Appling, GA. The ladies have their last big dance at the US Women’s Championship on September 25-27 in Ohio.

Last but not least comes the season’s finale, the United States Disc Golf Championship. The USDGC will return once again to Winthrop University in Rock Hill, South Carolina on October 7-10. Many eyes will be on Paul McBeth who is chasing history. McBeth is one win away from sweeping every Major championship in the 2015 calendar year. A feat that has not yet been accomplished in the history of Disc Golf.