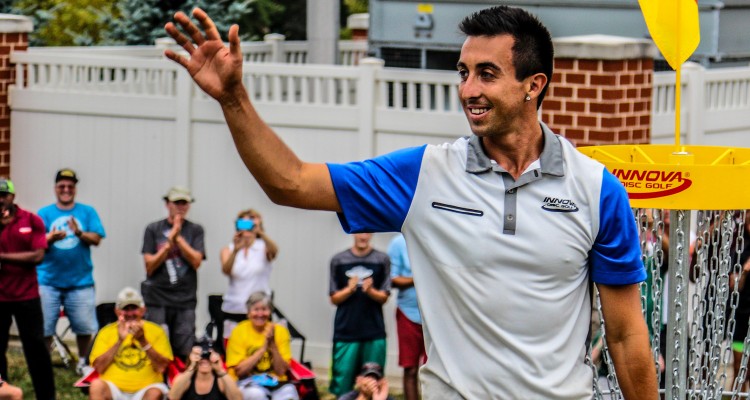 Share it !
Congratulations to Paul McBeth on his fourth consecutive PDGA World Championship title! Paul won by 9 shots making this year his largest margin of victory to date. At first glance, it might appear Worlds was no sweat for McBeth, however this win was anything but a walk in the park for the defending champion.

The 2015 PDGA World Championships began on Tuesday, August 4th. For the first two days, both Open pools played Moraine Gold once and Slippery Rock Gold twice. After the third round, Pro pools were merged and McBeth found himself on the second card, 8 shots behind Tennessee’s Will Schusterick who was out in front. Paul was facing serious competition and only 54 holes left to fight his way into the finals. Many started to wonder if a comeback was possible. Was McBeast starting to slip? Could he rally to pull off the #4peat? McBeth himself, had no doubt. He went to work first thing Thursday morning and proceeded to blister Deer Lakes. His round of -15 set a new course record and McBeast Mode had officially been activated. Paul’s round consisted of 13 birdies, 1 eagle, and 4 pars. Just like that he picked up 7 shots on the leader and moved into second place. Fans erupted and began to lick their chops at what appeared to be another epic battle down the stretch. And as one competitor put it on Thursday night, “Paul McBeth broke disc golf”. Paul was not finished. McBeast Mode had been switched on and McBeth had no intentions of turning it off anytime soon. His hot streak continued Friday at Moraine Gold where Paul carded 15 birdies and 3 pars to set yet another course record! That meant that in just two rounds, McBeth had gone from 8 strokes back to 8 strokes in the lead with just 27 holes to go.

The Semi-Finals were back at Moraine Gold, the same course McBeth had just dominated. With now an 8 stroke lead Paul could relax a bit, and proceeded to gain another 4 strokes on second place, extending his lead to twelve. Steve Brinster shot a bogey free -10 to take the fourth spot in the Final 9. Paul’s stellar play afforded him what amounted to a victory lap in the Final 9. Steve put on a spectacular show in front of a huge gallery; draining 40+ footers like they were drop-ins. Brinster had secured 4th place, but didn’t stop until the last putt had fallen. McBeth cruised effortlessly on Saturday afternoon to his fourth consecutive World Championship title, which was also his fourth PDGA Major win of the year. McBeth is four for four at the 2015 Majors, winning in Australia, Sweden, Finland, and now the World title here in the US. Paul continues to amaze everyone with consistent play and clutch comebacks when the stakes are highest. The Masters leaderboard was topped by Innova team members all week. Jay “Yeti” Reading, Patrick Brown, Ken Climo, Mike Moser, and Tom Carrillo held down top spots all week. As the dust settled on Saturday however, it was Climo who claimed the victory. The win was Ken’s third Masters World title, adding to his twelve Open World Championship crowns. Ken had to a lot of chasing this year. Climo did not grab the tournament lead until halfway through the Final 9. It was a sweet victory for him, made even sweeter by the presence of his wife and daughter who were with him most of the way. Patrick Brown’s brilliant performance earned him the second spot, while Mike Moser and Jay Reading would eventually tie for 3rd place. Joe Mela aka the “Technician” carved up the demanding Pittsburgh courses to win his second World Championship in the Grandmasters division. While the ageless wonder, Peter Shive, captured his 13th World title in the Legends division. Amazing!

There were countless outstanding performances last week. We could not be more proud of all of Sponsored Athletes and Ambassadors. Here is a breakdown by division of where everyone finished up: