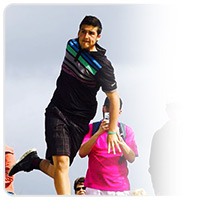 Forty-six players with PDGA ratings at or above 1000 entered the 2014 Memorial Championship Open Division. Seventeen year old Drew Gibson was not one of them. Drew was rated 999. So on paper, he didn’t stand a chance against players rated nearly 50 points higher. But as the old saying goes, that is why they play the game.

Congratulations on your third place finish at the Memorial. How does it feel to have finished ahead of so many incredible golfers?

Drew: Thank you. It felt great to be playing with all those guys at that level. It was a lot of fun.

So how are you feeling as you reflect on the weekend?

Drew: I feel pretty good. I was actually sick and taking Tylenol the entire time in Arizona. Finally I feel like I am beginning to snap out of it. Did being sick impact your game or mindset during the week?

Drew: Fighting the elements was pretty challenging. I mean it was hot, then cold, then windy, rainy, you name it. I think being sick slowed me down a little bit mentally. I really took my time which may have helped my decision-making at certain points.

Not too many people saw you coming. Did YOU see you coming?

Drew: (Laughs) Don Smith saw me coming. Don actually told Terry Miller before the tournament that I was going to win so that was on my mind. Honestly though, I really just wanted to stay focused on playing my best.
Pages: 1 2 3
Share it !