2018 has been a year full of excitement and accomplishments for Team Innova! Accomplisment after accomplishment, there hasn’t been a dull moment throughout the season. To recap the successful year we’ve compiled our Top 10 Moments of 2018, check it out! 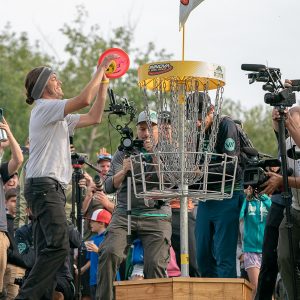 It was an incredible moment for the disc golf veteran, who has paid his dues since becoming a pro in 2003. Known as a steady player who would regularly finish in the top 15, he elevated his game in recent years to become a contender in the big events. In 2017, he nearly claimed the European Open major, but Paul McBeth narrowly edged him out.

At this year’s Worlds, Barsby took the lead by 1 stroke after Round 3 and held onto it after two more rounds despite a pack of top pros gunning for him. Watching Barsby hit clutch putt after clutch putt, you knew this was his year. A fan favorite for not only his play but also his playful demeanor, Barsby has been often called the ‘People’s Champ.’ With Barsby getting that boost in confidence a World Championship provides, look for him to make moves on additional majors. Feeling under-the-weather for most of the week, Paul McBeth dug deep during the USDGC in Rock Hill, SC, to fend off hard charging James Conrad, Kevin Jones, and Nate Sexton. Leading for the entire event, McBeth was finally caught by Conrad after Hole 13 of the final round. However, that’s when McBeth stepped on the gas making birdie on the next three holes. Up by 3, McBeth stunned the crowd when he went OB off the tee for the island-hole 17. He then called an audible, switching discs from his game plan and re-teed with a forehand Firebird, which landed safely and avoided a Hole 17 breakdown. Up by only 1 over Conrad on the last hole, McBeth parked a difficult approach for birdie and went on to win his second US title.

Normally Beast Mode only lasts a little while during a video game, however for special occasions like Round 2 of the Great Lakes Open Paul McBeth can engage Beast Mode for an unbelievably long time. During that round, McBeth made birdie on every single hole except two: Hole 2 he made eagle and Hole 10 he made par. He started out hot and stayed that way and made a difficult Toboggan Course in Michigan look as if he had adjusted the course settings to easy. His play was so awe-inspiring he landed on ESPN with a lengthy highlight. After it was all done he had managed a mind-blowing -18. Watching the final round, it was classic, controlled Nate Sexton. Timely putts like the lengthy one on Hole 7 combined with lots of precision forehands drove him to the top of the leaderboard. It was a tight win that showed Sexton has a lot more wins ahead of him.

Jessica Weese was looking for a big win for 2018. And going into the final round of the Ledgestone with the lead, that victory was in reach. Fighting off a determined Sarah Hokom who tied it up near the midway point, Weese put the contest out of reach with a brilliant string of holes in the closing stretch and won by two strokes.

Boosted by a scorching 995-rated Round 2 and rock-solid play for the rest of the Konopiště Open in the Czech Republic, Eveliina Salonen overtook 2014 World Champ Catrina Allen and others in route to her first major win.

As an homage to, two of the USDGC’s greatest champions, Ken Climo and Barry Schultz were grouped together for the first tee time of the 2018 Championship, which was the event’s 20th anniversary. Though Climo’s hip injury would not allow him to play the entire round, he was able to complete the hole. It was a special moment seeing Climo and Schultz, known for many epic battles including the 2003 USDGC Playoff, play this hole together one more time.

It’s easy to see why James Conrad is becoming one of Team Innova’s brightest stars. After losing a close battle to Paul McBeth at the Idlewild Open, James Conrad got the better of him by 1 at the MVP Open at Maple Hill for the biggest win of his season. Down by three strokes before the final round, Conrad played his smooth style of golf birdying 10 of the first 13 holes and outlasted McBeth at the end.

8. Alexis gets family bragging rights at Am Worlds – July With the hotly contested rounds between Alexis Mandujano, her sister Valerie, and Deann Donaldson, the Women’s Advanced division was the one not to miss as the Am Worlds in Charlotte concluded.

Alexis nosed ahead early in the Final 9 and later edged out Donaldson by two strokes and her sister placed a close third.

“I knew that no matter what the outcome was, that I was going to leave it all out there. That helped calm the nerves,” said Alexis.

A rocky start and thunderstorms during the final round didn’t deter Jermey Koling for his second straight Waco Charity Open win. Though Big Jerm played flawlessly after the early bogeys, with seven birdies and 2 eagles, he still had some work to do after regulation. Tied with Nate Perkins, Jerm ended over time quickly for the second straight year, needing only 1 playoff hole. Besides being one of the sport’s best putters of all time (he won five World Putting Competitions), a tenacious competitor with more than 100 wins, Jay “Yeti” Reading was and continues to be a tireless promoter and teacher of disc golf. He co-founded the Educational Disc Golf Experience that brings disc golf into schools, camps and youth organizations and leads countless clinics and other events every year.