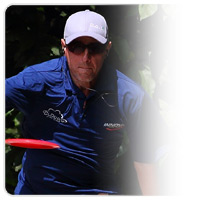 photo by Chad Corduroy LeFevre
This week Barry and Ken find themselves engaged in yet another battle to determine Master of the disc golf universe. They are joined atop the leaderboard by teammate Patrick Brown, and the 2011 Masters World Champion Jonathan Baldwin. Just behind them are Mike Moser and Jay Reading who are both extremely capable of moving into the division’s top spot. photo by Chad Corduroy LeFevre
Masters faced the 6369′ Red Course (Par 62) this morning. Ken Climo had a hot round this morning of -15, closing the gap to just 2 strokes from Barry (-40). This afternoon they head to the more difficult White Course. The 8083′ White Course (Par 64) was extended just prior to this event and presents an entirely different challenge from the 2010 World Championships held here in 2010. Anything can happen on White, especially on the back 9 where missing the fairway can be disastrous. photo by Chad Corduroy LeFevre
So angle your monitors accordingly and tune in for what should be an exciting day in the Masters Division. For fans of professional disc golf circa 2003, this is an Ali vs. Frazier-like matchup worthy of gourmet popcorn and beverage of choice.