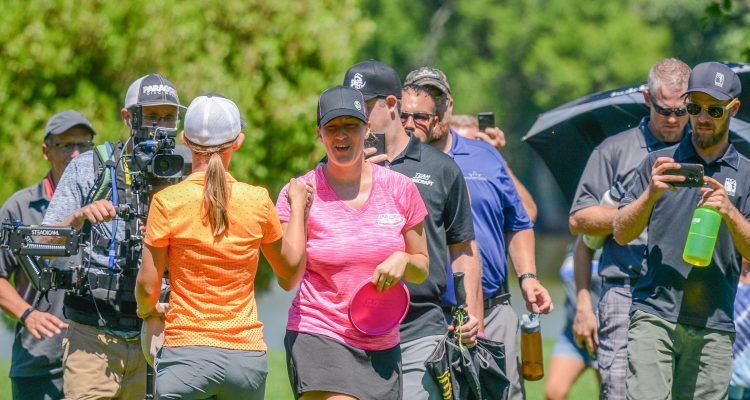 The 2016 Pro World Championships are in the books and Team Innova definitely left its mark. Congratulations to all of our sponsored players for battling it out amidst the blazing hot temperatures in Emporia, KS, this week.

What an amazing week for Valarie (Doss) Jenkins, who bided her time against the powerhouses Paige Pierce and Catrina Allen (the two of them leading every round of the tournament), and stole the show during the Final 9 to win her 4th World Championship title.

Many fans may not have predicted a win for Val, especially after she found herself three strokes back of then leader Allen after the first round. Her case didn’t get any better after two more rounds, slipping to five strokes back. But things started happening for Jenkins during round 4, when she submitted a sensational (-6) and Allen stumbled with a (+2). Pierce, though, had picked it up too, and was now leading Jenkins by four strokes. Jenkins continued her inspired play in the semi-finals with a (-1). Allen rebounded but Pierce slowed to where Allen and Pierce were leading Jenkins by only one stroke leading into the final 9 holes. And that’s when Jenkins really shined. Steady as she went, Val first pulled away from a struggling Allen after the second hole. Then, Jenkins with her smooth, mistake free play, set her sights on Pierce and soon overtook her too when Pierce made quadruple bogey on the fifth hole. After that it was clear sailing for Jenkins, shooting a (-2) for the finals and winning by 6 strokes. You have to hand it to Jenkins, who played her game and let her competition fall by the wayside.

With this huge win, her first world title since 2009, Jenkins proved she’s still a force to be reckoned with. Even despite being down early and for most of the tournament, her never-give-up spirit earned her another title and one she most certainly will never forget. Way to go Val! Best in the world yet again. In his quest for a 5th consecutive World Championship title, Paul McBeth did the only thing he could do which was to put himself into position to win. Sometimes though, no matter how well you play it is just going to be someone else’s day. This year that person was Ricky Wysocki who played brilliantly all week long. Ricky, Paul, and Nikko Locastro were the top three players who had distanced themselves from the majority of the Open field by midweek.

After the first round, the title of 5-time World Champion seemed like a real possibility for McBeth after he shot (-15) and led the field by one stroke. However, that score and lead wouldn’t last. Wysocki was playing white hot and McBeth had cooled down considerably since the tournament’s start. Plus a two stroke penalty was added to Paul’s opening round score after he later realized he had played a hole incorrectly. McBeth reported the misplay to PDGA officials immediately and would eventually be assessed the additional strokes.

As Saturday’s final rounds began, Paul McBeth just had too much ground to make up on Wysocki. McBeth had only the Final 9 to make up five strokes on a momentarily cooled-down Ricky Wysocki after McBeth had lit it up the semis with a (-13). Try as he might to put the heat on, McBeth simply could not re-ignite. Paul’s hopes of an incredible comeback victory faded almost entirely after a splash out for birdie on the 4th hole as Wysocki made birdie and extended his lead to eight strokes. Wysocki finished out the remaining holes in conservative fashion to win his first World title by six throws, which he no doubt earned after a week of determined play. The Innova Women’s Team held it down in two of the masters divisions as well. Des Reading (Masters) and Sandy Gast (Senior Grandmasters) both captured World titles of their own. For Des the win in Masters makes for a nice compliment to her three existing titles in Open Women. Des shared the lead after round one with 5-time Women’s Open Champion, Elaine King. Reading then took the lead by three after round 2 and held onto the lead for the remainder of the tournament. Des went on to capture her first world title since 2006 by a commanding seven throws. Sandy battled teammate Kathy Hardyman all week. The pair held the top two spots for the entire week. Gast proved to be just a little too much and went on to a relatively comfortable 16-throw win.