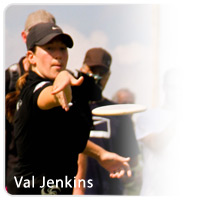 We would like to congratulate Catrina Allen, Valarie Jenkins, and all of the ladies who competed on the 2012 PDGA National Tour. Catrina, Val, and many others, have been battling it out all season long. Each of them deserve recognition for that kind of dedication to the game.

On Sunday, the NT Series title and trophy were awarded to Val in a ceremony following the Vibram Open. On Tuesday, it was announced that Catrina Allen was the official NT Champion, based on PDGA clarification of how NT ties should be handled.

Congratulations to Catrina on a great season, an outstanding win at Vibram, and on being crowned NT Champion for 2012. Please join us in saluting the accomplishments of all the ladies in disc golf who love the sport, who work hard and are just as dedicated as the men.