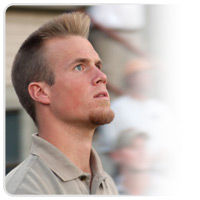 2011 Swedish Champion: Markus Källström
Haninge, Sweden – It was a tight battle from start to finish at this weekend’s Swedish Open. Markus Källström was tied after two rounds, and three back after three rounds. Then he uncorked a 1070-rated fourth round, giving him a two-shot lead heading into the finals. Markus held on to the lead to claim the Open title by a single stroke. Skål!

Kallstrom now holds both the Swiss and Swedish Championship trophies for 2011. His 2011 resume also includes second place at the Copenhagen Open. Along with many other top players in the world, Markus will have his eye on the granddaddy of Euro titles, the European Open in Finland, just two weeks away.

Anthon on Fire at the Frying Pan

Stockton, CA – Josh Anthon edged Derek Billings by two as the pair swept the top spots at the 17th annual Frying Pan Open. Patrick Brown, who has finished no lower than 4th all season, won Masters handily with a 9-throw victory. The Frying Pan was Patrick’s 8th win of the year.