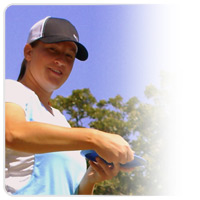 Valarie Jenkins went to school… Cal State University Monterey Bay, to be exact, where she took the lead in the Open Women’s division. She shot a couple over par in the whipping winds just off the coast. The weather was brisk and preparing for the round might make all the difference at CSUMB.

In the Masters division, Phil Arthur, who got in the tournament by the skin of his teeth, lassoed in some birdies at Ryans Ranch. The course featured lots of challenging long par 3 holes, some short, bread and butter holes, and a few challenging par 4 holes. Shooting 11 under par, Phil moved into a three stroke lead. Jay Reading shot his way into fourth place in Masters. Among the 100 person field, both are on cruise control to the finals. In Grandmasters, Jim Oates widened his lead with a smoking 83 at Pinto Lakes. He now has a seven stroke lead over Steve Wisecup, and nine strokes over Gregg Hosfeld.

The action in the Open division is heating up. They played at the revered DeLaveaga course, which features challenging holes, amazing views, huge redwoods and Eucalyptus trees to avoid. Yesterday’s leader, Derek Billings, is now a single stroke off the lead, behind Nate Doss and Eric McCabe. In fourth place, California’s Josh Anthon is three strokes off the lead, poised to strike. Never count Josh out; He’s had some of the highest rated rounds in history. Will Schusterick is tied for fifth, and Devan Owens and Steve Brinster round out the second card. Tomorrow the A pool will battle at Ryans Ranch.

Last night players piled into the Rio Theatre for a special preview of “Chains” the movie about disc golf. Tonight, players will attend the banquet, or relax and prepare for the next 27 hole round. Masters will be at DeLaveaga, Pro A-pool will play at Ryan Ranch. B-pool and Open Women play at Pinto, and Grandmasters play at CSUMB.