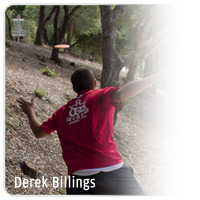 Innova Team Member Derek Billings captures top billing in the Open division first round at PDGA World Championships in Santa Cruz, California. Derek carded a blistering (68) at The Oaks Course at CSUMB , unofficially rated at 1089. Josh Anthon is in the hunt scoring an impressive (72). Double G starts things off with a big bang, acing his first hole! In the woman’s division Innova Europe Team Member Camilla Jernberg of Sweden shoots an (86) at DeLaveaga. Three time World Champion Valarie Jenkins is hot on her heels following by two throws.

Phil Arthur received a last minute call from tournament registration announcing that he is officially off the Player’s wait list. Phil played his first round well at Pinto Lake navigating to an (85), two strokes off the lead. In Ladies Masters, local Carrie ‘Burl’ Berlogar is in great position shooting a (96) at Ryan Ranch. Jim Oates’s goal was to have a “grand time” in the Grandmasters division. He ended up playing extremely well shooting 1046 rated round and topping the field by three.

Gregg Hosfeld, the ‘Cup’ Steve Wisecup and long time veteran Dave Greenwell are all within striking distance. In Senior Grans, Dr. Rick Voakes is in second place and on pace to capture another World Title. Last but on least, Legend Peter Shive commands impressively with a 12 stroke lead over second place.

The day ended with disc golfers flocking to the World Premiere of “Chains” at the Rio Theater in Santa Cruz, CA.

The stage has been set. Stay tuned for developing event action.
Share it !