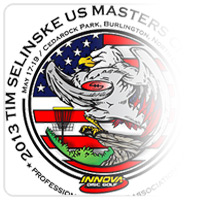 Competition begins today at the 2013 Tim Selinske US Masters Championship in Burlington, North Carolina. This event is strictly for players that were born before 1974. Nearly 200 golfers from around the country have gathered to enjoy one of the Carolina’s most treasured disc golf venues.

Cedarock Park was originally designed in 1986 by Innova Hall of Fame member Carlton Howard, along with Bob Watson. Cedarock offers a private, country club-like setting that is tailor made for championship play. In addition to the wonderful courses at Cedarock, players will enjoy the unique camaraderie that surrounds this particular event. The US Masters tournament is named in honor of its founder, Tim Selinkse. Tim created the US Masters in 2000 and hosted this PDGA major event until he passed away in August of 2009 after a brave battle with a rare illness. Tim will forever be in the hearts of many as his warm and caring spirit left a permanent mark on this tournament as well as the entire disc golf community. A spirit that will be celebrated by all this weekend. We wish all the competitors at this year’s US Masters the very best of luck. We would also like to thank the many volunteers and sponsors committed to making this PDGA Major a success especially this year’s tournament director, Robert Leonard. Tim would be proud. Patrick Brown leads the field after shooting a blazing -14. Right on his heels is North Carolina native, Brian Schweberger finishing at -13. Jonathan Baldwin finished -12 and tied at -11 is Jay Reading and none other than the Champ himself, Ken Climo.
In the Women’s division, Des Reading is tied for first with Elaine King, and Michelle Horn is 5 strokes back.

2013 Tim Selinske US Masters Leader Board