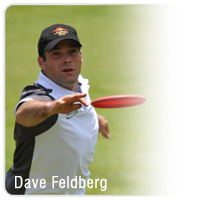 Dave Feldberg has already won four A-Tiers this year, and now he can add a National Tour event to his impressive list of wins. Feldberg capitalized on strong 3rd and 4th rounds at the marathon 30th Kansas City Wide Open. Competitors played five different courses in the epic three day NT event. In the end, Dave Feldberg, Will Schusterick, Steve Brinster, and Matt Orum battled in an all Innova final nine. Valarie Jenkins won in the Women’s division.

Playing five different courses in three days gave the 30th KCWO a bit of a feeling of a 2012 Worlds preview. The lead changed hands four times in as many rounds, but Feldberg’s consistency landed him at the top. Will Schusterick’s second place finish puts him neck and neck with Paul McBeth in the 2012 NT Points race. Will also carded an 1100 rated second round to shoot into the lead. Steve Brinster spoiled the touring pro “party” with his trip to Kansas City. He may not be traveling around the country weekly, but he is a powerful force wherever he is playing. Matt Orum shot up the leaderboard edging out McBeth for the last spot in the final nine.

Paul McBeth, who led after the 3rd round finished in 5th place, while Ricky Wysocki finished tied for 9th. Brian Schweberger made the trip from North Carolina, finishing tied for 13th. In the Womens division, Valarie Jenkins led from stem to stern, winning by five strokes. Valarie has two National Tour wins this year and leads the NT Points race.