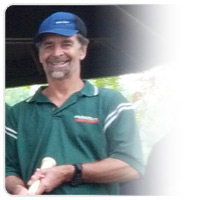 This year’s Tim Selinske US Masters Championship was looking to be a wet one, with fear of a rain delay looming after the remnants of Isaac headed into the midwest. But the rains headed elsewhere, leaving Louisville mostly dry for the players on all but the very last day.

Barry Schultz and Ken Climo held the lead after the first round, with Patrick Brown and Jay “Yeti” Reading close on their heels. Saturday’s lead card fractured the close knit group. Barry and JohnE McCray shot 50 each, setting the course record, while Ken and Patrick struggled with 57 a piece. Yeti made a move into 3rd with a solid 51, despite ongoing knee problems. Going into the final round on Sunday, Barry had a single stroke lead. However, when he hit hole 9, there was no catching him. He birdied nine of ten holes to finish regulation play with a 5-stroke lead over McCray. Then the rains came. Event organizers and players made the decision to cancel the final nine due to the impending weather. Jay Reading finished in third, Patrick Brown in fourth and Ken Climo in fifth place. In the Grandmasters, Gregg Hosfeld started strong. On Friday he shot just one stroke off of Barry’s hot round. He maintained his lead all weekend edging out World Champion Johnny Sias for the win. Dr. Rick Voakes and Alan Beaver battled in the Senior Grandmasters division, with Dr. Rick earning one of the distinctive trophies. About those trophies… Each division winner received a full sized custom Tim Selinske signature Louisville Slugger bat. The custom bats were an original idea and a great nod to Tim’s love of both disc golf and baseball.