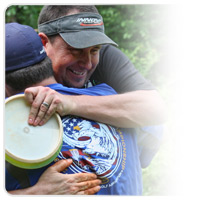 Burlington, NC – The second PDGA Major of the year, The US Masters Championship, celebrates the life and legacy of one of Innova’s founders, Tim Selinske. Tim was always smiling, always positive. The top two contenders who battled on Sunday for the win were among the players who personify Tim’s spirit best: Jay Reading and Brian Schweberger. Jay Reading shot a near perfect 16 under par round to tie up Brian going into the exciting final round on the challenging Rock Creek course at Cedarock Park.

The final group teed off after the rains had ended for the day, leaving the course was soggy and sloppy. Added attention to balance was needed just to walk the course, yet the top groups shot some amazing golf in tough conditions. Brian Schweberger capitalized on an errant first drive by Jay resulting in a bogey. Brian would birdie 11 of his first 12 holes to gain a four-stroke advantage with 6 holes to play. Ken Climo was on the second card, but was on a birdie streak of his own, after 13 holes he was 12 under par, and tied with Jay, but failed to convert on a couple easier holes at the end of the round, finishing fourth. Patrick Brown, who led after the first round was tied with Yeti going into the final hole, a long 500+ foot uphill hole. He looked to be shooting for an eagle to best Jay, but landed in the woods and couldn’t make the birdie to tie Jay, so he finished a respectable 3rd. “Schwebbie” went on to win by four strokes to win his first Major title. This is his first year in the Masters division. Des Reading won her first US Masters title this weekend. After two rounds in a dead heat with last year’s champion, Des slowly pulled away, capitalizing on her opponent finding the same water that Jay found on the very first hole of the final round. She won by 8 strokes in the end. Alan “Birdie” Beaver won against a small field in the Grandmasters division. He won by 19 strokes.Tournament director Robert Leonard and staff did an outstanding job hosting their first major. The people of Burlington, especially the Parks Department, and Jonathan Owens in particular deserve much praise for stepping up to run this great event.