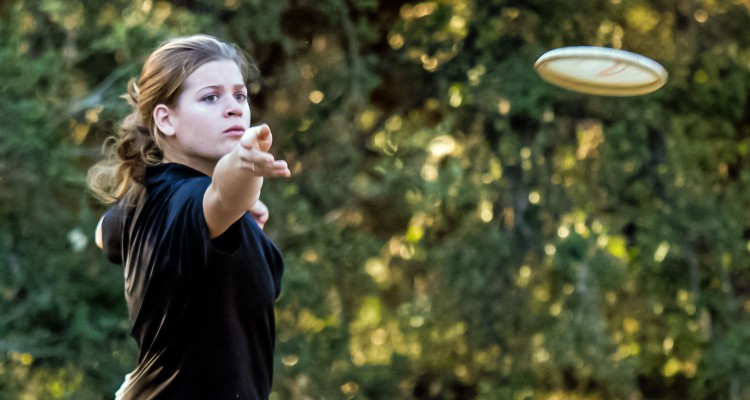 A mixed doubles event is a proven way to expose more women to competitive disc golf. Mixed doubles events are more casual and offer a supportive atmosphere for women players. These events can be held the day before or after a regular tournament, or as a complete and separate event.
Basically, a male/female team of golfers enters the event together and pays a single entry fee. Payout can be made as a team, or separated by men’s and women’s divisions. There are several formats available. It is suggested that events keep number of holes to 18 per day. This allows time for socializing before and after rounds. Events should not be too difficult for new players who are not accustomed to playing 36 holes in one day.

Consider hosting a Pro/Am women’s doubles event the day before a tournament in your area. This event can be run in conjunction with a traditional pre-tourney doubles event. Use a traditional Best Shot format and pair the experienced players with the newer players. The purpose of this type of format is for the more experienced players to share their knowledge and provide advice to newer players. Pros do not necessarily need to be Professional level players, they can simply be experienced Advanced players. By hosting this event before a tournament, it gives the women players a chance to meet each other plus the newer players have an opportunity to play the course and to learn basic rules of play and etiquette. Again, the emphasis of this event is for the women players to share their knowledge and have fun together. Before hosting any event, make sure park regulations are followed and any necessary permits are obtained.

The following format is enjoyable for an event with two rounds of eighteen. It allows team members to play on the same card for the entire first round, and then with other players for the second round.

First Round:
Holes 1 through 9 – Play with your own partner.
Holes 10 through 18 – Swap partners with those on the same card.
Second Round:
Holes 1 – 9 – Players grouped by total score from first round. The woman player with the lowest score is paired with the male player with the highest score.
Holes 10 – 18 – Players swap partners with those on same card.

There are several advantages for using the above format. First, it allows each woman participant to drive, upshot and putt on every hole. It also allows a novice woman player to play with her teammate for the first nine holes while she becomes comfortable with competition and the rules of the sport. The second nine holes, she gets to play against her partner. By the start of the second 18, she should be confident of the encouraging atmosphere and be ready to play with other players. This format also allows the woman a chance to play with other people besides her teammate and be exposed to different throwing techniques and philosophies.

Players may play with own partners, be grouped randomly or be grouped by pairing top level male players with lowest level female players.

Holes 1 through 9 – Play with your own partner.
Holes 10 through 18 – Switch partners with those on same card.

You can find our more information about a successful series of mixed doubles events using the Double Alternate Shot format at: Paske Partners website.

Mixed doubles events can be run in the traditional mixed doubles format used at the World Championships. In these mixed doubles events, teams play together throughout the event and compete directly against other teams. During the first round competitors play Best Shot: both players throw and choose the best lie, both throw from that lie and then continue to choose the best lie until hole is complete. Second round is Alternate Shot: each partner alternates shooting until hole is complete and continues alternating on following holes. For example, female player drives, male player approaches, then female player has successful putt. The male player will then drive on the next hole. The scores from each round are combined and the team with the lowest score wins. There is no right or wrong format for running mixed doubles events. The main point is to expose more women players the sport of disc golf in a fun and encouraging atmosphere.
Pages: 1 2 3 4 5 6 7
Share it !

What an encouraging weekend it was for women’s disc golf. More than 1600 ladies around...More

8.22.12 We would like to congratulate Catrina Allen, Valarie Jenkins, and all of the ladies...More